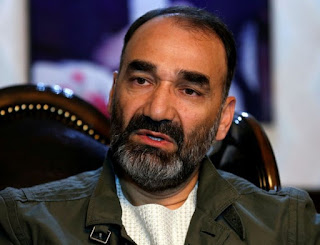 Governor Noor Hangs On. The governor of Balhk province has been dismissed by President Ghani but he refuses to leave office. The U.S. is hoping that conflict is avoided. The Germans, heading up Train, Advise, and Assist Command - North (TAAC North), are surely keeping tabs on the political situation for RS HQs. Governance in Afghanistan has a long way to go . . . Read more in "President, governor spat poses new challenge in Afghanistan", Deutsche Welle, January 23, 2018.

Farah Governor Quits. The governor of the western Afghan province of Farah has resigned citing worsening security in the region that he blamed on political interference and corruption. He took aim at the security forces as a source of much of the provinces problems. (RFE, 26 Jan 2018).

Civil Dimension of the Afghan Conflict. Anthony H. Cordesman, a national security expert at the Center for Strategic & International Studies (CIS), writes about the other side of the Afghan war (other than military) - politics, governance, economics, corruption, and drug trade. Read "The Civil Half of the Afghan War", December 6, 2017.