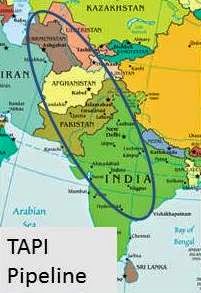 TAPI: A Milestone in Country's Economic Development. The start of the construction of the Afghanistan section of the Turkmenistan-Afghanistan-Pakistan-India (TAPI) pipeline in Herat province holds great promise for the country. (Tolo News, Feb 22, 2018).

Posted by Afghan War Blog at 2:30 AM No comments:

One of Canada's 'signature projects' in Afghanistan was the repair of irrigation canals in Kandahar province in an effort to improve the livelihoods of local farmers. The project was meant to restore water flow from the Dahla Dam by repairing a main canal and 60 secondary canals. The project has been completed but the results are less than what was hoped for. In addition, there is concern that the extensive project will slowly deteriorate as the Afghan government doesn't have the annual funds needed to keep the canal infrastructure functioning. Canada, having pulled out almost all of its personnel, will no longer be providing assistance with the irrigation project. The $50-million program was started by Canada in 2008 and was called the Arghandab Irrigation Rehabilitation Project. Read more in "Long-term future of signature Canadian project in Afghanistan at risk: report", CTV News, November 15, 2014.
Posted by Afghan War Blog at 2:00 AM No comments:

Two communities in the Panjshir Valley located north of Kabul in Panjshir province are benefiting from combining their resources and working through their respective Community Development Councils (CDCs) to build a government-funded irrigation canal. The farmers should be able to double their agricultural output with the new canal. The funding was provided by international donors through the National Solidarity Program (NSP). The NSP is a function of the Ministry of Rural Rehabilitation and Development (MRRD) and supported by the World Bank and Afghanistan Reconstruction Trust Fund (ARTF). The funded program encourages local governance and development through small-scale infrastructure initiatives. Read more in "Irrigation Canal Unites Two Communities", World Bank, February 10, 2014.
Posted by Afghan War Blog at 1:30 AM No comments:

The Afghanistan Research and Evaluation Unit (AREU) has recently published a document entitled Water rights and conflict resolution processes in Afghanistan: The case of the Sar-i-Pul sub-basin" dated December 2013. This research is an attempt to focus specifically on water rights and the resolution of conflicts related to water-sharing at different hydraulic and social levels within the Sar-i-Pul sub-basin in northwestern Afghanistan. It examines the on-going gulf between actual water management practices and the recent 'good water governance' models that have been enshrined in the 2009 Water Law. You can access the publication at the link below:


www.areu.org.af/EditionDetails.aspx?EditionId=702&ContentId=7&ParentId=7&Lang=en-US
Posted by Afghan War Blog at 6:00 AM No comments: