Training the ANA - Not so Much. A recent visitor to Afghanistan provides us his views on how well the training program in Afghanistan is going.


"Yet the current training is aimed a bureaucrats more than warriors, revolving around administrative functions such as budgeting and planning rather than the best way to fire a rifle or mount an attack."

Read what David J. Lynch has to say in "Training Afghan soldiers is just not working", USA Today, October 5, 2015.

SFA and BPC Questioned. Phillip Carter, a former Army officer and a senior fellow at the Center for a New American Security provides us his thoughts on having foreign troops fight our wars. He takes a hard look at the recent Security Force Assistance (SFA) and Building Partnership Capacity (BPC) ventures in Iraq and Afghanistan and finds some areas where the effort was lacking. He cites a difference in interests, the complexity of U.S. weapons, and a lack of a will to fight among our surrogates. Read "Why foreign troops can't fight our fights", The Washington Post, October 2, 2015.

NUG, Bad Comms, & Bad Intel. The combination of a government mired in conflict (Ghani vs. Abdullah), bad communications across and up/down with MoI, MoD, Corps, Zones, etc., and bad intelligence is consistently setting up the Afghan National Defense and Security Forces (ANDSF) for failure. Read more in "The Plight of Afghanistan's Soldiers", The Diplomat, October 7, 2015.

"I Fought For Nothing". An infantryman remembers his tour in Afghanistan (2004-2005) and contemplates if it was worth it. Read "I fought for nothing: Staggering incompetence, egregious corruption & America's doomed war in Afghanistan", Salon, by John Rico, October 7, 2015.

Did HTS rationalize Pedophilia in Afghanistan? An HTS explanation of "Man-Boy Love Thursday" may have contributed to the U.S. looking the other way when confronted with "Bacha Bazi" events. Or so says two authors of a recent story about the HTS. Two anthropologists conveniently tie the recent story of the Special Forces NCO getting kicked out of the Army for assaulting an Afghan police officer who was raping a young Afghan to everything that was wrong with the Human Terrain System that provided cultural advice to the U.S. military in Afghanistan. While their writing may be convincing to some it looks to me as another opportunity to attack a very valuable program that provided great results in the Afghan COIN fight. Read their news story (but with a grain of salt) in Counterpunch, October 9, 2015.

Pakistan - Aiding the Taliban . . . Still. If you want to solve the problem of the insurgency in Afghanistan then you must look east to Pakistan. So says Fareed Zakaria - an opinion writer for The Washington Post and also commentator on several other media enterprises. The bottom line is that very few insurgencies are defeated if they have a cross-boarder sanctuary and a powerful patron (that would be Pakistan and Pakistan). Read his article "The key to solving the puzzle of Afghanistan is Pakistan", The Washington Post, October 8, 2015.

Paper Plans and Reality on the Ground. The battle for Kunduz exposed the strategy for the defense of Afghanistan as paper thin. Despite air power, advisors, and intelligence support from the U.S. (and NATO, of course) the Taliban were still able to take a provincial capital and hold it for a number of days. This problem of containing the Taliban goes beyond the development of the Afghan National Defense and Security Forces (ANDSF) into a professional counterinsurgency force. It has a lot more to do with eradicating the senior ANDSF leadership of corrupt officers. Read more in "Is Kunduz the Beginning of the End for Afghanistan?", by Emile Simpson, Politico, October 4, 2015.

Prospects of Success in Afghanistan? Not so Much. One observer, Patrick Skinner, has a pessimistic view of the situation in Afghanistan. Read "What Endures From Operation Enduring Freedom", The Cipher Brief, October 8, 2015.

Posted by Afghan War Blog at 3:30 AM No comments:

A recent report by the Special Inspector General for Afghanistan Reconstruction (SIGAR) has revealed some alarming statistics about the Afghan National Army (ANA). In January 2015 SIGAR released its quarterly report to Congress on the reconstruction efforts in Afghanistan. SIGAR relies on ISAF (now called Resolute Support) to provide statistics on the ANSF. Last fall ISAF provided some ANSF information but - for the first time in years - some important data was classified. The news media and Congress questioned this new practice of classifying information that in years prior was released to the public. Resolute Support HQs reversed itself and released the data in early 2015. SIGAR has now issued a supplement to the January 2015 report to Congress which includes the updated, once classified figures.

The statistics provided in the updated SIGAR supplemental report are troublesome. ANA desertions, casualties, and discharges among its personnel is at an all-time high - and the ANA personnel strength is down almost 20,000. The ANA strength is now at 2011 levels (4 years ago). This is an alarming statistic. Couple this report about the ANA with a recent report about the personnel strength of the Afghan National Police (ANP) and its numerous "ghost policemen" and there would seem to be a big problem in the ANSF - one that Resolute Support Headquarters must be aware of but does not seem to be raising alarms about - at least publicly.

The Afghan Ministry of Defense (MoD) issued a statement on March 4, 2015 rejecting the SIGAR report that indicated ANA soldiers were deserting en mass. But it did acknowledge a significant decline in its ranks. MoD claims it is exploring solutions to fix the problem. It should start with a review of its leadership and reduce corruption.

Leadership. The ANA has at all levels too many commanders who are ill-suited to be in leadership positions. Many do not take proper care of the soldiers in their units. Food is marginal, living conditions inadequate, medical care sometimes slow or non-existent, pay is erratic, and leave policies not followed. If ANA soldiers were treated better by their commanders then many would opt to stay in beyond their contracts and some less would be likely to desert.

Corruption. This remains one of the biggest problems in the ANA. Pay is taken from soldiers, food and fuel diverted to markets and the profits go to commander's pockets, and equipment meant for the ANA (vehicle repair parts) find their way into the bazaars. If corruption within the army was reduced more soldiers may be tempted to remain in the service of their country.
Posted by Afghan War Blog at 4:00 AM No comments:

Video - "Sandhurst in the Sand"

NATO Channel has produced a video about the "Sandhurst in the Sand" officer academy located near Kabul. The officer academy is forging the next generation of Afghan National Army (ANA) officers. Watch this 5 minute long video posted on YouTube.

www.youtube.com/watch?v=PXaUULKNZ0I
Posted by Afghan War Blog at 2:30 AM No comments:

News reports indicate that six members of the Afghan National Army (ANA) have been arrested in the wake of the civilian casualties from the recent attack on a wedding. The bride was wounded and is reported to have died of wounds in the hospital. The rocket exploded at a wedding in Sangin district,  Helmand province on Wednesday, December 31, 2014. Many of the 17 victims were women and children. The incident took place while there was a government and insurgent fight in the area. Afghan officials have said that the ANA was responsible for the incident. Read more in a news story (Radio Free Europe, Jan 1, 2015).
Posted by Afghan War Blog at 3:00 AM No comments:

Email ThisBlogThis!Share to TwitterShare to FacebookShare to Pinterest
Labels: ANA

The commander of the ISAF Joint Command (IJC), LTG Joseph Anderson, says that he is confident in the Afghan National Security Forces' tactical capabilities. He says they are "a very good fighting force". He does say that the Afghans need to focus on logistics, intelligence, aviation and special operations integration. IJC is days away from shutting down and LTG Anderson provides some comments over the past several months that he has commanded IJC. Read more in "Three-star: Afghan army getting better, needs to 'keep upping the game'", Military Times, December 5, 2014.
Posted by Afghan War Blog at 2:30 AM No comments:

ANA Improves on Their Skills with Artillery Employment 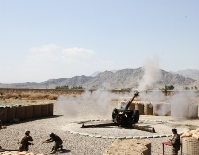 The Afghan National Army (ANA) is slowly improving in their ability to employ their organic artillery (D-30 howitzer). This steady improvement can be seen in 1st Brigade 201st ANA Corps in the North of Kabul (NoK) region of Regional Command East. The process of fielding the 122-mm D-30 howitzers started very late considering the U.S. involvement in the Afghan war has been going on for the last decade; however within the last year much progress has been made. The ANA brigades are slowly coming up to speed on their ability to fire the artillery and are now integrating artillery fires plans into their overall operations. Members of 4th Brigade Combat Team 1st Cavalry Division (based at FOB Gamberi) have been mentoring the Afghans in artillery employment for the last several months. 4-1 CD deployed several months ago as a Security Force Assistance Brigade or SFAB. Read more in a news release by 4/1 CD public affairs entitled "ANA shoots to sustainable success", DVIDS, March 12, 2013.
Posted by Afghan War Blog at 9:08 AM No comments:

Some Afghan Army Units Provide Hope for the Future

If there is a glimmer of hope associated with the performance of the Afghan National Security Forces (ANSF) as ISAF withdraws from Afghanistan it resides in the highly-trained Afghan Special Operations forces. Among these forces the two formations that stand out the most are the Afghan National Army Special Forces (ANASF) and the Afghan Army Commandos. Both Afghan units have been formed, trained, and advised by the Combined Joint Special Operations Task Force - Afghanistan (CJSOTF-A) headquartered at Bagram Air Field and with special operations teams of SEALs, Special Forces, and Marines scattered at COPs and FOBs throughout Afghanistan.
Posted by Afghan War Blog at 5:00 AM No comments: