While the nation and world is focused on events in the Ukraine, Syria, Iraq and elsewhere; in the country of Afghanistan members of the International Security Assistance Force (ISAF) are still at work. Their principal mission in 2014 is Security Force Assistance or training, advising, and assisting the Afghan National Security Forces (ANSF) to become more proficient and able as the ISAF mission goes away at the end of 2014. Part of this mission is to ensure that the Operational Coordination Centers located at the regional level (usually co-located with the ANA Corps) are able to function on their own. This includes being able to track events on the battlefield. SFAAT 3 is currently advising the OCC-R South in Kandahar to plot significant acts that occur in their battlespace. While NATO and the U.S. military have sophisticated software applications that do this (C2PC, ADOCS, CPOF, etc.) the Afghans are many years behind. SFAAT 3 has put together a series of programs for the ANSF (similar to Google Maps) that has the ability to track all types of significant acts. Read more in "SFAAT 3 encourages teamwork by improving the ANSF common operating picture", DVIDS, September 19, 2014. (Photo by SSG Whitney Houston, RC South).
Posted by Afghan War Blog at 4:00 AM No comments:

News About OCC-R at FOB Gamberi


"LAGHMAN PROVINCE, Afghanistan – On March 2, 2008, Afghanistan President Hamid Karzai signed the decree that initiated the creation of Operational Coordination Centers at the provincial and regional levels for the Afghan National Security Forces. The Government of the Islamic Republic of Afghanistan designed these OCC-Provincials and OCC-Regionals to serve as hubs of information wherein the different pillars of the ANSF could share intelligence and coordinate operations in real time, even while missions are being executed. Six years later, OCCs are now located across the country. Afghan National Army, Afghan National Police, Afghan Border Police, Afghan Civil Order Police, and the National Directorate of Security, all work together under the same roof at these centers to help keep their country secure."


Read more about the OCC-R located at FOB Gamberi in the North of Kabul (NoK) area of Regional Command East in "Coordination centers fortify Afghan security", DVIDS, February 9, 2014. Learn more about OCC-Rs in Afghanistan here.
Posted by Afghan War Blog at 2:00 AM No comments:

Email ThisBlogThis!Share to TwitterShare to FacebookShare to Pinterest
Labels: OCC-R

A Security Force Assistance Advisor Team or SFAAT is working with the Operational Coordination Center - Regional at FOB Lightning in Regional Command East to help it become more effective. The SFAAT is from the 3rd Brigade Combat Team, 10th Mountain Division. The OCC-R has members from all the Afghan security forces. It is sometimes difficult to get the different branches of the Afghan National Security Forces (ANSF) to work together. To address that problem the OCC-R conducts periodic synchronization meetings and after action reviews - the SFAAT helps in facilitating these events. One specific focus of the SFAAT is the development of an intelligence capability. Intelligence drives operations in a counterinsurgency fight. For that reason the SFAAT has an intelligence officer to advise and assist in this critical area. Read the rest of the story at "Spartans help Afghan forces forge their future", DVIDS, January 29, 2014. Learn more about Operational Coordination Centers.
Posted by Afghan War Blog at 3:30 AM No comments:

Can the ANSF Hold Back the Taliban during Elections? 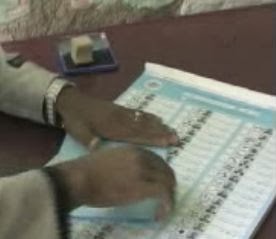 A big question on everyone's mind is whether or not the Afghan National Security Forces (ANSF) can provide security for the 6,000 plus voting polls located across the country. A recent report by the Ministry of Interior and Ministry of Defense states that the ANSF will be able to secure 95% of the polling stations. Other outside observers are not so optimistic. A key component of the security system working is the integration of the Afghan National Army (ANA), Afghan National Police (ANP), National Directorate of Security (NDS), and other security organizations working together to secure the election. One integral part of the coordination will take place at the Operational Coordination Centers (OCCs) located at the regional and provincial levels. Read more about election security in "As Taliban steps up attacks, can Afghanistan hold peaceful national polls?", Christian Science Monitor Security Watch, January 21, 2014.
Posted by Afghan War Blog at 1:30 AM No comments: 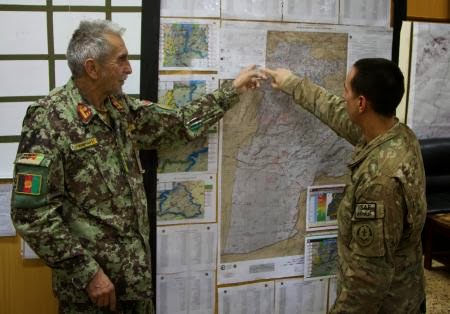 The Operational Coordination Centers at the regional level (OCC-Rs) are slowly improving in their capabilities to coordinate and track medical evacuations of injured or wounded members of the Afghan National Security Forces (ANSF). This ability has been slow in coming but it would appear that the presence of a never-ending succession of medical advisors at the OCC-Rs is slowly having an effect. While the Afghan Air Force still has problems in conducting CASEVACs in any meaningful way (in terms of capacity) the ground evacuation capability of the ANSF is getting better. The picture at right (photo by CPL Mariah Best) shows Captain Nolan Ellis, medical advisor for the 201st Security Force Assistance Team, discussing the seven-line medical evacuation process with an ANA officer in the OCC-R South. Read more in "Medical operations in Afghanistan: Continued success as ANSF takes the lead", DVIDS, January 12, 2014.
Posted by Afghan War Blog at 4:00 AM No comments:

The Security Force Assistance Advisory Team or SFAAT advising the Operation Command Center - Region or OCC-R in Laghman province has successfully assisted the OCC-R in the conduct of a Operation Command Center Foundation Course.  This 21-day course is designed to teach Afghan ANP and ANA students topics such as map reading, computer work, and intelligence fusion. The OCC-R SFAAT is based on FOB Gamberi and works along side the OCC-R Afghan staff on a daily basis.  The foundation course will go a long way to ensure that the Afghan members of the OCC-R (and OCC-Ps) will be able to function independently of U.S. military advisers (SFAATs) at some point in the near future.

You can read more about the OCC-R and the OCCP Foundation Course in "Afghans leading the way in Laghman province", DVIDS, February 6, 2013 at the link below.

http://www.dvidshub.net/news/101541/afghans-leading-way-laghman-province
Posted by Afghan War Blog at 7:17 AM No comments: