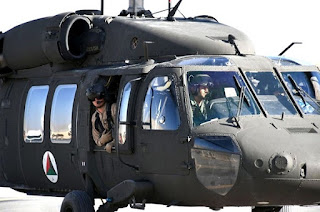 The AAF and Helicopters. An Afghan and U.S. aviator have combined forces to write an article in an attempt to convince us that the replacement of the Russian-made Mi-17 with the U.S.-made UH-60 Black Hawk is a good idea. Hmmm. Read "A New Platform and New Plan for the Afghan Air Force", Small Wars Journal, January 17, 2018.

Mi-17 Replacement - "True Costs". James Durso enlightens us on the 'true costs' of replacing the Mi-17 with the UH-60 in "Overpriced Afghanistan helicopter upgrades amount to a subsidy for contractors", The Hill, January 21, 2018.

U.S. Aircraft Increased in Afghanistan. Central Command has re-positioned aircraft to Afghanistan to beef up the number of strike aircraft. Read a press release from Resolute Support, January 24, 2018. It appears that the additional aircraft are A-10 Warthogs and MQ-9 Reaper drones.

ATF 444. The Afghan Territorial Force (ATF 444) rescued eight Afghan government and military prisoners from a Taliban compound in Helmand province on January 23rd. The ATF 444 is one of three elite National Mission Units of the Ministry of Interior (MoI).

SIGAR Report on Child Sexual Assault in Afghanistan. A classified report published in June 2017 by the Special Inspector General for Afghanistan Reconstruction (SIGAR) has been cleared for public viewing and has been available as of January 18, 2018. A damaging report on how the U.S. military ignored incidents of sexual exploitation of young boys by members of the Afghan National Defense and Security Forces (ANDSF). Read Child Sexual Assault in Afghanistan, SIGAR, January 18, 2018.

Digging Deeper into Afghanistan. The Soufan Center has provided a 'security update' on the situation in Afghanistan in "TSC INTELBRIEF: The U.S. Digs Deeper in Afghanistan", January 24, 2018.

Prisoners Freed in Night Raid. Afghan and U.S. special operations units freed a number of prisoners held by the Taliban in Helmand province on Saturday, January 20, 2018.

Bomb Attack Against Hospital. There was a massive bomb explosion in the vicinity of Kabul's Jamhoriat hospital on Sunday, January 27th. A number of people were killed and wounded. Early estimates have almost 100 deaths and many more injured. The Taliban have claimed responsibility. An ambulance loaded with explosives caused the many deaths.

Spain Sending Troops. According to a recent news report Spain will be sending more troops to Afghanistan. (Tolo News, Jan 19, 2018).

Militia Members Killed. Balkh province officials say that 18 people were killed in Sholgara district on Saturday, January 20th. Most of the dead were members of a Public Uprising Force. (Tolo News, Jan 21, 2018).