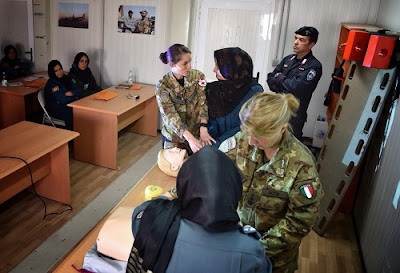 Expeditionary Advising. Afghanistan is not Iraq; but advising is advising. 2nd Bn 101st Airborne Division (Task Force Strike) had a mission to advise the Iraq Security Forces (ISF) during the fight for Mosul. TF Strike had to rethink the way they conducted advise and assist operations. The brigade shifted from advising in static locations to "expeditionary advising". This model allowed advisors to have a persistent presence forward with their ISF counterparts. Eventually "expeditionary advising" gave way to "Advise, Assist, Accompany, and Enable" (A3E). An excellent article entitled "Expeditionary Advising: Enabling Iraqi Operations from the Gates of Baghdad through Eastern Mosul", Small Wars Journal, February 22, 2018.

IMET Programs. Every year U.S. International Military Education and Training (IMET) programs are used to train approximately 6,000 - 7,000 foreign officers from roughly 120 friendly and llied nations in US military schools alongside their US counterparts. Afghan officers of the MoD and MoI are included in these training programs. Learn more in "Normative Persuasion and the Impact of IMET Programs on U.S. National Security Goals", Georgetown Security Studies Review, February 22, 2018.