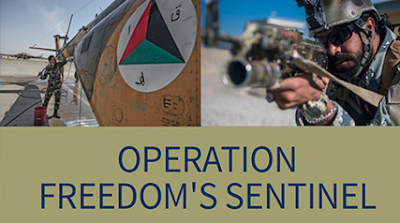 The Lead Inspector General for Operation Freedom's Sentinel Quarterly Report to the United States Congress has been published. It covers the period of time from October 1 to December 31, 2017. The report summarizes significant events involving OFS. Topics covered in the 140-page report include:


Some of the highlights and findings in the report indicate that there has been no improvement in security. While Resolute Support HQs maintains that the ANDSF (specifically the ASSF) has improved this has not translated into increased security on the ground. In fact, it appears that the Taliban have increased their control or influence of some of the districts in Afghanistan. The opium poppy cultivation has set a new record for crops produced in 2017; which, in part, funds the Taliban insurgency. Political tensions within the National Unity Government have polarized the government bureaucracy and rendered some of the institutions ineffective. The failure to implement an electronic ID card is - in part - affecting the ability of the government to conduct the 2018 parliamentary elections.

There are some key challenges facing the Afghan government and and the NATO coalition forces in Afghanistan. These include the task of defeating the Islamic State in Khorsan Province (IS-KP), pressuring Pakistan to eliminate terrorist safe havens, holding credible elections on time, and preventing violence from undermining humanitarian relief efforts.

The report is available at the link below: