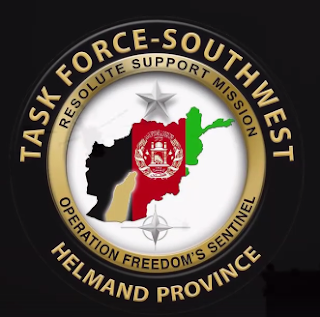 Task Force Southwest has seen the first rotation of Marines complete their tour. The nine-month deployment saw the Marines deploy advisors and trainers to assist the Afghan National Army (ANA) 215th Corps and 505th Zone National Police in Helmand province. The Marines took over from Task Force Forge last spring - an Army organization that was advising the ANA and ANP. The advisory element was made up of Marines from III Marine Expeditionary Force and led by Brig. General Roger Turner. The new advisory team is led by  Brig. General Benjamin Watson. The transfer of authority occurred on January 15, 2018.

The second rotation of Marines will likely have looser rules of engagement and greater authorities. Resolute Support HQs has repeatedly indicated that advisors will be found at the lower tactical levels - going down to kandak (battalion) level to conduct the train, advise, and assist mission. The Marines will likely advise some units on a persistent basis while other Afghan units will see advisors on an episodic basis. Read more in "Combat Is No Longer Off the Table for Marines in Afghanistan", Task and Purpose, January 15, 2018.