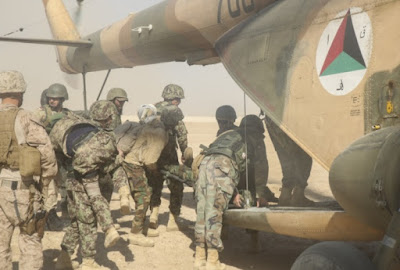 40th ID to head TAAC South. The California's Army National Guard 40th Infantry Division (Mech) will form the core of the hqs and staff of Train, Advise, and Assist Command - South (TAAC South). In November elements of the 40th ID participated in a training event at Hohenfels, Germany to prepare for the deployment. (DVIDS, Nov 18, 2017).

Canada and Afghanistan. The CEO of Afghanistan, Dr. Abdullah Abdullah, recently conducted a tour of North America. During his visit he expounded upon the need continued support by the international community for Afghanistan. Abdullah met on the sidelines of the Halifax Forum to ask Canada's Defence Minister Harjit Sajjan for more help in military training. See "Afghanistan looks to Canada for more training support", CBC News, November 19, 2017.

Intel Analysts Ready for Afghan SFAB Deployment. Intelligence Analysts (35F) play a critical role in determining the enemy's capabilities, vulnerabilities, and probably courses of action. Most Intel Analysts work at a desk behind a computer. For a 35F with a Security Force Assistance Brigade the job will most likely take him 'outside the wire' as a member of combat advisory teams. The 1st SFAB will soon deploy to Afghanistan in early 2018. Read "Outside the Wire: Intel Analysts in Army's 1st SFAB get career-building opportunity", DVIDS, November 7, 2017.

The Colors of U.S. Army's Beret. The formation of the SFABs got very contentious with the plans to issue a beret with a shade of green close to the famed Green Beret of the U.S. Army Special Forces. The Army quickly announced a change of plans - it would issue a beret with a shade of brown. Read more about the color of berets in "Earning it: A complete history of Army berets and who's allowed to wear them", by Meghann Myers, Military Times, November 20, 2017.