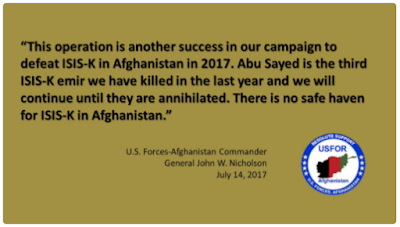 ISIS-K Emir Killed on July 11th. U.S. forces killed Abu Sayed, the emir of the Islamic State of Iraq and Syria - Khorasan Province in a strike on the group's headquarters in Kunar province, Afghanistan on July 11th.Two previous leaders of the group were killed in July 2016 and April 2017. IS-K continues to find sanctuary in remote areas of the Kunar and Nangarhar province despite being heavily targeted by U.S. drones, U.S. SOF, and Afghan SOF. Read a statement by DoD, July 14, 2017. See also "Pentagon: US Forces Kill ISIS Leader in Afghanistan", Military Times, July 14, 2017.

Two U.S. Service Members Wounded on July 7th. According to a statement by a spokesman for Resolute Support two service members were wounded in Nangarhar province and medically evacuated out of theater for treatment.

A Contracting Option? The White House political advisors (in this case Bannon and Kushner) are exploring options for the Trump administration to navigate a way out of the morass in Afghanistan. Two successful businessmen from the DynCorp and Blackwater era provided their insight and made some recommendations on utilizing contractors on a larger scale in Afghanistan. Read "Trump Aides Recruited Businessmen to Devise Options for Afghanistan", The New York Times, July 10, 2017.

New Afghan Strategy? Not Quite Yet. The re-vamped Afghan war strategy review by the Department of Defense isn't quite ready for prime time. SecDef Jim Mattis says it is underway and wouldn't provide a finish date as indicated in a recent statement - "You know me, I don't give timelines". Got to love "Chaos". See "Jim Mattis: New Afghanistan strategy isn't finished yet", Washington Examiner, July 15, 2017.

Retaking Nawa District (Helmand)? It appears that units of the 215th ANA Corps are on an offensive to re-capture a district in southwestern Afghanistan from the Taliban.

Taliban Threatening Kunduz . . . Again. In 2015 the Taliban took and held Kunduz city in northern Afghanistan for two weeks. In 2016 they once again attack Kunduz - taking hold for a short time parts of the city. This fighting season (2017) the Taliban have once again attempted (and may still continue to attempt) to take the provincial capital. However, recent improvements on the Afghan security forces to work together and leadership difficulties of the Taliban have contributed to a less than successful effort. Read more in "New Taleban Attacks in Kunduz: Less coordinated, still well-placed to threaten the city", Afghanistan Analysts Network, July 9, 2017.