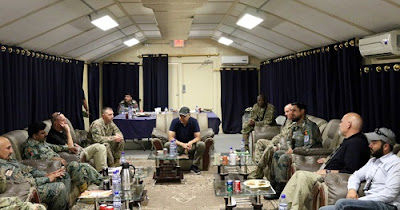 Kabul Bombing on Monday, 24 July. A bomb exploded on Monday morning 7:00 am Kabul time in a busy market area of Kabul (Police District 3) killing many civilians. Latest count is 36 killed and 60 wounded. The incident took place close to the residence of Ustad Mohaqiq. Many of those killed worked for the Ministry of Mines and Petroleum. The Taliban claimed credit for the bombing and says that they were targeting two buses carrying intelligence personnel. Reports say the car bomb rammed into one of the buses. Read more in "Afghan Taliban Claims Deadly Suicide Car-Bomb in Kabul", Gandhara, July 24, 2017.

SECDEF and Afghan Uniforms. The Secretary of State was not happy when learning how the U.S. wasted millions on Afghan uniforms not suited for the terrain or geography of Afghanistan. $28 million more was paid for a proprietary pattern instead of using a pattern owned by the U.S. government. In addition, the uniforms featured a woodland pattern in a nation that has less than 2% forested areas. See "Mattis: Overspending on Afghan Army Uniforms Exposes Waste", Voice of America, July 25, 2017.

Taliban Using Captured or Bought U.S. Weapons. The number of M4s, vehicles, and night vision devices supplied by the United States to the Afghan National Defense Security Forces has increased significantly. Some of the equipment is captured but a greater number is sold to the Taliban by corrupt Afghan army and police personnel. Read more in "US weapons complicate Afghan war", Navy Times, July 25, 2017.