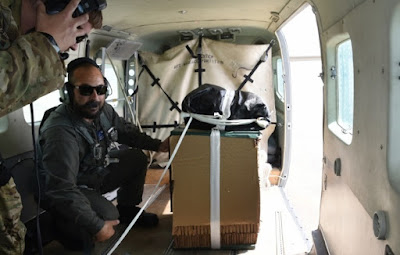 Update on Marines in Helmand. The U.S. Marines arrived in Helmand province a few months back - replacing a U.S. Army element (Task Force Forge) in the 'train, advise, and assist' mission. There are high expectations that the Marines return to this dangerous province will set things right with the 215th ANA Corps and 505 Police Zone HQs. That sentiment, of course, deserves a big "Hmmmm". It is highly unlikely that any progress will be made at all. Unless, of course, the Marines trot out the worn story line of how the Afghan Army and police conducted combined operations to mount a multi-day operation to launch a resupply convoy to a beleaguered district center that has been surrounded by Taliban fighters for months. So, what is the latest update? Read "Amid possible surge, Marines help Afghans 'shape the battlefield'", Marine Corps Times, July 3, 2017.

U.S. Senator Worries on 'Diplomatic Vacuum'. Senator Elizabeth Warren (D-Mass.) is worried that key State Department posts are unfilled at a time when the U.S. needs a 'whole-of-government' approach to the 16-year long conflict in Afghanistan. See "Elizabeth Warren, back from first trip to Afghanistan, says, 'I'm not there on a troop increase'", The Washington Post, July 6, 2017.

Inside Story on U.S. Troop Increase. Despite President Trump saying that SECDEF Mattis will decide troop level increases for Afghanistan it appears that it is not necessarily so. Read "Memo Reveals Trump Isn't Telling the Full Story on Afghan Troop Levels", Task & Purpose, July 6, 2017.

U.S. Senators Visit Afghanistan. Five United States Senators recently visited Afghanistan. One (Sen Warren) said that 'political patience' in the U.S. on Afghanistan is wearing thin. Sen McCain decries the lack of an overall strategy. Other senators want something done about the sanctuaries the Taliban enjoy in Pakistan. Read more in "US still has no path to peace in Afghanistan, bipartisan senators say", The Guardian, July 4, 2017.

Lithuania Forces Rotating. The Lithuanian Armed Forces are rotating their personnel in Afghanistan. The personnel are assigned to Kabul and to Train, Advise, Assist Command - West (TAAC-West) in Herat (western Afghanistan). See "Lithuania troops to leave for multinational operations areas in Afghanistan and Iraq", The Baltic Times, July 4, 2017.

Conventional Troops in TAA at Tactical Level. For the past few years the only U.S. troops advising at the tactical level were special operations forces (and the aviation advisors with the AAF). But with the decrease in security and a resilient Taliban U.S. conventional troops are finding themselves in the tactical fight. Read more in "Death of U.S. soldier in Afghanistan highlights the evolving role of conventional combat troops there", The Washington Post, July 5, 2017.

Turkey Taking a Leading Role in Afghanistan. Turkey has been contributing to overall effort to stabilize Afghanistan ever since 2002. It maintains a sizable contingent of military forces in the Kabul region and heads up Train, Advise, and Assist Command - Capitol. Read more in "Is Turkey's Erdogan seeking a leading role in Afghanistan?", Deutsche Welle, July 7, 2017.

Casualty Reporting by RS HQs. Resolute Support HQs in Afghanistan will no longer issue an initial statement within hours of a US combat death. Instead, deaths will be announced by DoD 24 hours after family members have been notified. The policy change is intended to prevent the accidental release of a fallen US service member's name before Next of Kin (NOK) notification. See "The War in Afghanistan Just Got Harder to Follow in Real Time", BuzzFeed News, July 5, 2017.

Villagers Armed in Tora Bora Region. The National Directorate of Security (NDS) has armed local villagers in a remote district of eastern Afghanistan's Tora Bora mountains. The local militia group has been formed to aid in the fight against Islamic State fighters. 300 villagers from the Pachiragam district have been armed and equipped (and presumably will be paid salaries as well). The district is within the 201st Afghan National Army Corps area of responsibility but it has not been successful in defending the area against Taliban or Islamic State influence or control. Read more in "Afghan Government Arms Villages to Fight IS in Tora Bora", Voice of America, July 7, 2017.