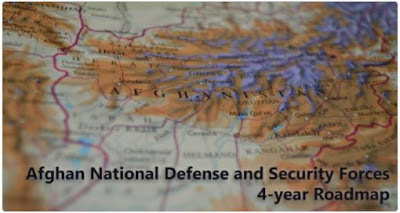 Over the past several months the Afghan security institutions have developed a strategic plan to enhance the capacity and capability of its security forces, professionalize its military and police leadership, and defeat the insurgents. This strategic plan has been named the "Afghan National Defense and Security Forces 4-year Roadmap". The Afghan government and NATO commanders have worked together to develop this strategic plan with the over-arching goal of expanding " . . . Afghan government control over more territory, increase the proportion of the population residing in that territory, and compel the Taliban to agree to a peace process leading to reconciliation and an end of hostilities." [1]

The key components of the "4-year Roadmap" are to bolster capability and capacity of the Afghan Air Force (AAF), double the number of Afghan Special Security Forces (ASSF) [2], reduce corruption, professionalize the Afghan senior security leadership and training,and create an environment that fosters unity of effort and command. [3]

[1] Quote is from the Report to the United States Congress, Special Inspector General for Afghanistan Reconstruction (SIGAR), April 30, 2017, page 82. The Taliban now control more territory in Afghanistan than at any other time since the time that their regime was toppled in late 2011. The percentage of population living in Taliban controlled or contested areas has significantly increased over the past several years. It is unlikely that the Taliban, having not been defeated on the battlefield, will come to the peace table any time soon.

[2] The ASSF consist of the MoD's Afghan National Army Special Operations Command (ANASOC) and MoI's General Command of Police Special Units (GCPSU). The ASSF is considered by many to be the only professional military or police organizations within the ANDSF. The Special Mission Wing (SMW) is sometimes grouped within the ASSF. Over the past few years 70% of the offensive operations have been conducted by the ASSF.