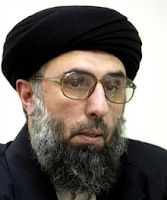 A peace deal was signed between the Afghan government and the Hezb-e Islami (led by Gulbuddin Hekmatyar). The HIG has been relatively dormant the last few years. The Taliban have come out against the peace deal that the insurgent group HIG and Afghan government recently signed. According to some reports the agreement was signed via conference over the Internet using Skype! The U.S. was not a party to the agreement; which was negotiated by the Afghan High Peace Council.

The exiled leader of HIG has been granted amnesty for past offenses (he is referred to as "The Butcher of Kabul"). Of course, the United Nations is listing members of HIG to include its leader as terrorists; so the Afghan government could conceivably ask for the HIG names to be removed. One wonders if Hekmatyar will be running in the next presidential election? Expectations need to be managed because the peace agreement with HIG will hardly affect the level of violence within the country or of war on the battlefield. HIG is not the military power it once was.