RS Cdr's News Conference - Some Facts and Some Spin 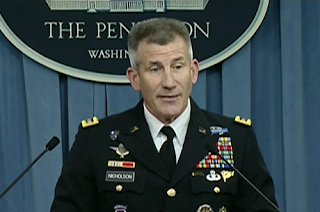 General John Nicholson recently conducted a press conference with reporters in Washington, D.C. Nicholson is the current commander of Resolute Support in Afghanistan. He had a few interesting comments to make. While his comments have a certain amount of spin it is also a very informative news conference.

DoD News Release. For more DoD spin read "Afghan Security Forces Growing to Take Over Mission, General Says", Defense Media Activity, September 23, 2016. Nicholson emphasizes that the mission has changed from counterinsurgency to 'train, advise, and assist'. He stated that the Afghan security forces executed 'Operatin Shafaq' (or Dawn) in three successful phases - the defense of Kunduz (April and May), expansion of the security zone in Helmand, western Kandahar and Uruzgan (June and July), and then in Nangarhar later in the summer. The problem with his analysis is that the situation in Kunduz is still critical, Helmand's provincial capital (Lashkar Gah) is threatened (with 90% of the province controlled by the Taliban), and Uruzgan's provincial capital (Tarin Kowt) now under attack. So . . . . .

Checkpoints, SOF, and more. He points out the problem of too many checkpoints, how it dilutes offensive power, and leaves police units isolated and vulnerable. Nicholson also speaks about the effectiveness of Afghan SOF units but also about the misuse of these units (using them for conventional force units). A lot of topics (ISIS, ISK, TTP, IMU, troop levels, array of forces, expansion of advisory effort, framework nations, enablers, etc.) covered in this news conference.