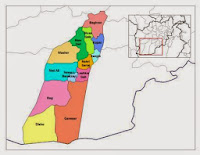 Helmand Province still at Risk. A war correspondent takes us on a journey to Lashkar Gar, the provincial capital of Helmand province in southwestern Afghanistan. The province has been the scene of heavy fighting with most of the districts controlled by the Taliban. Although the government (and U.S. spokesmen) say that many of the districts are under Afghan government control the reality is that the government forces occupying several district administrative buildings within a small walled compound and the Taliban are free to roam the rest of the district. A lot of spin at play here. For a more realistic version of what is happening in this war-torn province read a report entitled "First Helmand, Then Afghanistan", Foreign Policy, September 21, 2016.

Govt Forces Control only 70% of Afghanistan. According to General Dunford, the Chairman of the Joint Chiefs of Staff (and former ISAF Cdr), says that the Afghan security forces are taken more casualties "than we're comfortable with" and that they still are lacking in key areas including air power, special operations, and intelligence. He called the war in Afghanistan a stalemate during an appearance before the Senate Armed Services Committee. Overall his assessment was on the gloomy side. Read more in a news report by The Washington Post, September 22, 2016.

Afghanistan and the Little Bird. The Afghan Air Force has received the last four of 27 MD-530F armed helicopters. Read more about these versatile choppers of the AAF in "Warplanes: Afghanistan Adopts Little Bird", Strategy Page, September 18, 2016.

ISIS Regrouping in Nangarhar Vicinity. The Islamic State in Afghanistan has suffered some setbacks this year but are still a problem in eastern Afghanistan. Afghan government leaders are hoping that 'popular uprising' and Afghan Local Police can contain the threat. Read more in "Tribal Leaders Say IS Regrouping in Afghan-Pakistan Border Areas", Voice of America, September 21, 2016.

News Article: "Losing in Afghanistan". A recent report by Foreign Affairs (Sep 22, 2016) suggests that the United States is losing the war in Afghanistan based on data released by the Pentagon. Measures of insurgent activity are the highest since in five years, Afghan government security forces are suffering high levels of casualties, and civilian deaths are rising.

Local Uprising Group in Badakhshan. A freelance reporter, Franz Marty, travels to Raghistan district, Badakhshan province and spends time with a local defense force that has taken the districts security into their own hands. The author asks what this means for the central government over the long-term. Read "Afghanistan's Anti-Taliban Vigilantes: Blessing or Curse?", The Diplomat, September 15, 2016.