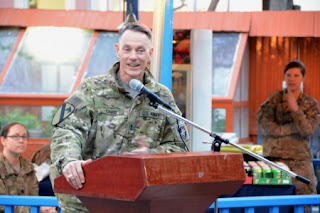 CSTC-A and Women. The Combined Security Transition Command j- Afghanistan (CSTC-A) recently celebrated International Women's Day. A keynote speaker (see photo above) was Maj. Gen. Gordon "Skip" Davis, Jr. Every photo I ever see of this guy has him smiling! There is something seriously wrong here. Doesn't he know that he has three very good reasons not to be so jolly? 1) He lives and works on that small postage stamp of real estate in Kabul known as Camp Resolute Support, 2) he is in a war zone, and 3) he is tasked with training up the ANA and ANP. Hmmmm. Read more in a news press release by DVIDS, March 9, 2016.

Role of Afghan Women. Laura Bush (former 1st Lady) is an honorary co-chair of the U.S.-Afghan Women's Council and chair of the Women's Initiative at the George W. Bush Institute. She has penned an opinion piece about women in Afghanistan where she explores the progress made for women in Afghanistan over the past 15 years and identifies the areas that still need further advances. Read "How Afghanistan's women are helping the country move forward", The Washington Post, March 7, 2016.

Book - We Are Afghan Women. The George W. Bush Presidential Center is publishing a book about Afghan women. The book is being released . . . timed with International Women's Day. "The book spotlights the stories of 29 inspiring and heroic Afghan women in their own voices and records their extraordinary struggles, resolve, and will to triumph in present-day Afghanistan." Read more about We Are Afghan Women: Voices of Hope.

Court Reduces Sentences in Mob Killing of Farkhunda. Four men sentenced to death for the killing of a woman named Farkhunda (which received widespread international attention) have had their sentences reduced to as little as ten years in prison. (The New York Times, Mar 9, 2016).

Short Film - Masculinity in Afghanistan. The Afghanistan Research and Evaluation Unit (AREU) conducted some research titled The Other Side of Gender Inequality: Men and Masculinities in Afghanistan. A film based on this research was filmed. It has English subtitles and is 20 minutes long, and posted on YouTube.com on March 9, 2016. A little bit of culture about being a man and a women in Afghan society.

IDLG Wants More Women in Govt. The Independent Directorate of Local Governance has called for a stronger presence of women in local governance across Afghanistan. (Tolo News, Mar 7, 2016).

Radio Shaesta - Back on the Air. An Afghan women's radio station was put off the air as a result of the Taliban attack and subsequent occupation of the Kunduz city this past fall. The radio station was ransacked and the broadcasting equipment was confiscated or destroyed. But . . . they are back up and running. Read "Afghan Women's Radio Returns After Taliban Attack", Voice of America, March 8, 2016.

Women Reporters in Afghanistan. There are some difficulties and cultural barriers that women journalists face when reporting from Afghanistan. Read the story of two women reporters that were in northern Afghanistan in late 2001 in "No Woman's Land: On the Frontline with Female Reporters", International News Safety Institute, March 7, 2016.