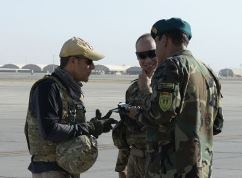 Afghan Migrants. Many refugees from Afghanistan are making their way (via people smugglers) across Iran into Turkey where they hope to either find work (and a place to live) or a way to get to Europe. However, Europe has begun the process of closing its doors after being overwhelmed with refugees from Syria, Afghanistan, and north Africa in 2015. Read more in "Afghans feel forgotten in Europe's migrant crisis", Reuters, March 6, 2016.

Young People Desperate to Leave Afghanistan. There is not a lot of opportunity for young Afghans. However Europe is no longer the promised land. Slovenia, Croatia, and Macedonia (long the transit nations for the migrant populations heading to Scandinavia and Germany) has been closing its borders. Economic migrants from Afghanistan are no longer welcome. Watch a video 1-minute long video entitled Determined to Leave Afghanistan, Even as Europe's Borders Close, Radio Free Europe, March 10, 2016.

Empty Promises for Migrants. Many Afghans making the treacherous journey to Europe are finding the promises made by human smugglers are not fulfilled. Read more in "European Dream Unfulfilled for Afghan Economic Migrants", Radio Free Europe, March 10, 2016.

Canada: Interpreters Wait While Refugees Accepted. I guess one has to wonder which government is treating former Afghan interpreters worse. Is it Canada or the United States. Neither government seems to give much priority to the Afghan interpreters to whom our military owes so much. Read more in "Refugees fast-tracked but interpreter forced to wait", Toronto Sun, March 8, 2016.