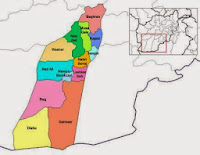 RS Advisors - "Leave Bases  & Attack". Resolute Support advisors are harping about the importance of the Afghan National Defense Security Forces (ANDSF) of leaving bases (a defensive posture) and going on the defensive. There is a certain amount of consternation of the lack of offensive operations by some Afghan brigades. For instance, just over a year ago a stroll through the 209th Corp base in northern Afghanistan would find hundreds of ANA soldiers planting trees and flowers - far from the battlefield. There is a disconnect within the leadership of the ANA. Read more in "Come out of bases and attack rebels, Afghan forces told", Pajhwok Afghan News, March 2, 2016.

Heavy Clashes in Helmand. There are some serious engagements taking place in the southern province of Helmand, Afghanistan. Both sides are suffering heavy casualties. Read more in Pajhwok Afghan News, March 5, 2016.

Sangin District Under Threat. This district in Helmand province remains a volatile battleground and the lines of communications from the district to the provincial capital are difficult to travel along. Afghan government troops are attempting to clear the areas along the highway but are meeting stiff Taliban resistance. Read more in "Troops in Sangin Call for Air Support", Tolo News, March 2, 2016.