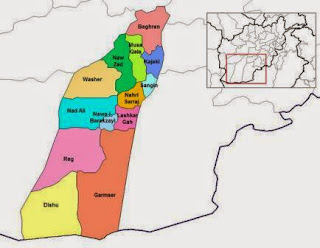 Battle for Helmand. Much of the province is in the hands of the insurgents. The provincial capital, Lashkar Gah, remains secure but its citizens are worried. The district centers may be under the control of the government forces; but this usually means the government troops and police occupy a small compound of several buildings where the district government offices are located. Typically the district governor (DGov) and other government officials (MAIL, MRRD, etc.) are located in the provincial capital. Read more in "Afghanistan Taliban: Mistrust and fear in battle for Helmand", BBC News, January 13, 2016.

ICRC in Helmand Province. Watch a short video (2 mins) about the International Committee of the Red Cross activities in this very troubled province. Facebook, January 7, 2016.

Helmand Casualties. More than 700 Afghan civilians have been killed or injured in the last nine months in Helmand province. (Radio Free Europe, Jan 14, 2016).