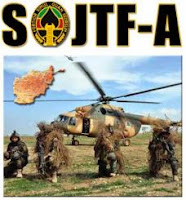 VSO, Gant, Water, Crops, and COIN. One writer, Doyle Quiggle, manages to combine a variety of topics (although related) into an essay on how to win a small war! He tells us of the failures of the Village Stability Operations (VSO) program of U.S. special operations in Afghanistan, of how Jim Gant was doing VSO right, and the importance of water in counterinsurgency at the village level. Read "Small Farms and Small Wars: Planting The Garden in Village Stability Operations", Small Wars Journal, November 29, 2015.

Event - "Lessons from VSO and ALP". Dr. Corey Lofdahl is presenting a lecture on the topic of Implementing  Counterinsurgency in Afghanistan: Lessons from Village Stability Operations and Afghan Local Police (VSO/ALP). He is a senior scientist with Charles River Analytics who worked in 2011 and 2012 at the Combined Forces Special Operations Component Command - Afghanistan (CFSOCC-A). The presentation is on Thursday, December 10th in Washington, D.C. and is hosted by The Institute of World Politics. (Note: CFSOCC-A is now known as the Special Operations Joint Task Force - Afghanistan or SOJTF-A).

DoDIG Investigation on ANASOF TAA. The Inspector General for the Department of Defense intends on conducting an assessment on U.S. and Coalition efforts to Train, Advise, Assist, and Equip the Afghan National Army Special Operations Forces (ANASOF). The objective is to determine whether U.S. government and coalition goals, objectives, plans and resources to train the ANASOF are sufficient, operative, and relevant. Read the memo from DoDIG, November 25, 2015.

"Project Gray" - Fighting in the Gray Zone. Warfare has changed over the past few decades. The advent of Hybrid Warfare, Irregular Warfare (IW), and the use of Unconventional Warfare (UW) by our adversaries (Iran, ISIS, al Qaeda, Russia, and others) has forced the U.S. military to take a long look on how to operate in this new environment. The UW experts at Fort Bragg (that would be the Green Berets) are learning to fight in what is now being referred to as the "Gray Zone".  The initial Special Forces training that Green Berets undergo goes a long way to prepare its members for this kind of fight; yet the learning never stops. As part of this never-ending learning process the U.S. Army Special Operations Center of Excellence has started "Project Gray" and published a website that reflects the work in this area. www.projectgray.org

5th Group Reviving Vietnam Era Flash. The solid black flash worn on the berets of members of the 5th Special Forces Group will be giving way to a bit of history. The new (or old) flash will be the one worn by 5th Group Soldiers while serving in Vietnam (and also stateside). Read more on the perplexing move by 5th SFGA and Special Forces Command in "Army's 5th Special Forces Group to Resurrect Vietnam-Era Beret Flash", Military.com, December 1, 2015.

USSF Fighting with Kurds for Months. Kurdish fights say that US Special Forces have been fighting ISIS for months in northern Iraq. The Obama administration continues to maintain that there are 'No Boots on the Ground"; however, perhaps that is because the SF dudes (in another era they were referred to as "Sneaky Petes") are all wearing sneakers. (The Guardian, Nov 30, 2015).

SOCOM Cdr Likely Choice for CENTCOM. General Votel is a top candidate to succeed General Austin for command of Central Command. Given the importance of the fight against ISIS in Iraq and Syria he is a good choice. Read more in "SOCOM's Votel is Top Choice to Take Over CENTCOM", Defense One, December 3, 2015.

How Does SOCOM Feel about the Gender Integration Order? - He is all for it! The commander, General Votel, seems to think it is a good idea. (The feedback I hear from those on the SF teams is quite different.) Listen to a 8-minute long video of the leader of SOCOM justifying his decision to support the SECDEF in the full integration of women into all special operations organizations. (USSOCOM, December 3, 2015).

How Do SOF Operators Feel about Women in SOF Units? Not So Much! The RAND Corporation conducted a study that special operations leadership commissioned on the integration of women into SOF units. 85% of the rank and file said "NO!, Don't Do IT". But with the proper 'career guidance', 'gender integration seminars', 'focus groups', 'safe space discussions', and more I am sure the steely-eyed combat veterans with multiple deployments in Iraq, Afghanistan, and elsewhere will come around. Read "Special Ops Survey Showed 85% Opposed Serving With Women", Defense One, December 4, 2015.

Book - Relentless Strike. I just finished reading Sean Naylor's recent book about the Joint Special Operations Command (JSOC). Very informative read with perhaps more information than USSOCOM would have wanted published. I am sure there was more than one former 'operator' talking out of school. The book is available on Amazon.com.