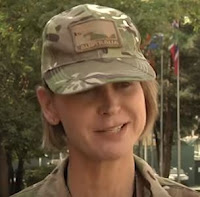 Certainly a noble objective yet a hard task to accomplish. The plight of women in Afghanistan is among the worst in the world - although since 2001 there has been some significant improvement. Part of ISAF's (and now Resolute Support) mission has been to integrate women into the Afghan National Defense and Security Forces (ANDSF). This has been a slow and sometimes frustrating process. Resolute Support has a gender advisor to help this process along. A five-minute long video by Resolute Support HQs featuring Col. Deanne Gibbon of the Australian Air Force (filmed in the Destille Garden with birds chirping in the background) explains the importance of gender issues in the counterinsurgency fight.
www.youtube.com/watch?v=gHIkiVMp4kc
Posted by Afghan War Blog at 2:30 AM