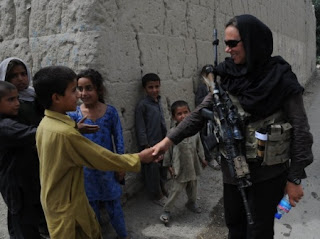 The ban on prohibiting women in combat roles is set to expire in January 2016. Many supporters of fully integrating women in combat roles point to the success of the Cultural Support Teams (CST) utilized by Special Operations Forces (SOF) in Afghanistan. Most were attached to SOF teams conducting Village Stability Operations (VSO) while some were attached to SOF teams conducting night raids. After all, if these small teams of women successfully worked with SOF in combat then why not with conventional armor, artillery, and infantry units? However, using the CSTs in Afghanistan as proof that women should be fully integrating into all combat roles ignores the true role of CSTs to SOF. Their assessment, selection, and training was different and limited (although still tough) and their role was limited as compared to their male SOF colleagues. A  paper by T. Nageen Pegahi provides more light on the topic. Pegahi served as strategic advisor and analyst to Special Operations Joint Task Force - Afghanistan (SOJTF-A) from 2013 to 2014. Currently she an assistant professor of National Security Affairs at the Naval War College. Read "Curb Your Enthusiasm / Skepticism Over Women in SOF", Small Wars Journal, September 22, 2015.
http://smallwarsjournal.com/jrnl/art/curb-your-enthusiasmskepticism-over-women-in-sof
Posted by Afghan War Blog at 3:00 AM