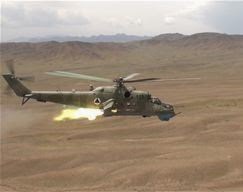 Some news outlets are reporting that Afghanistan may receive more Mi-35 gunship helicopters from Russia. The Mi-35 is the export model of the Mi-24 HIND D that wreak lots of havoc during the Soviet occupation of Afghanistan a few decades back. Currently the Afghan Air Force (AAF) has five Mi-35's but only one or two are flying depending on maintenance. The U.S. is providing twenty A-29 Super Tocanos but that deal has been years in the making and for some reason the aircraft won't be fully deployed until 2016 and 2017 (not exactly a timely solution). The U.S. also put some armament on some of the MD-530s (a small reconnaissance helicopter) but the Afghans are not very impressed with that 'little bird'. The U.S. has also outfitted some of the Mi-17s (a transport helicopter) with guns - which some Afghans refer to as a "flying tractor". The Afghans like the Mi-35 and hopefully the Russians can come through with the deal. So . . . I can just see it now. Russian maintenance and pilot instructors working hand-in-hand with advisors from Train, Advise, Assist Command - Air (TAAC-Air) while U.S. pilots are dodging Russian missiles fired from Russian naval vessels in the Caspian Sea and Russian jets in Syrian airspace. Perhaps the Russians can discreetly share some of their vodka with their U.S. counterparts. Call it an "ice breaker". Interesting times. Read more in "Afghanistan and Russia to sign a deal for delivery of Mi-35 gunships", Khaama Press, October 9, 2015. See also "Russia to Sell Modern Attack Helicopters to Afghanistan", The Diplomat, October 9, 2015.