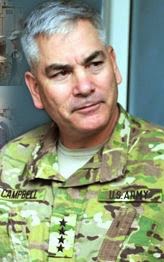 General John Campbell, the commander of the Resolute Support mission in Afghanistan, was in Washington this past week making the rounds. One of those stops was his appearance before a committee of the U.S. Senate where he gave an update on the situation in Afghanistan and answered the questions posed to him. Some questions were softballs while others were hard-hitting. One of the most touchy topics was the recent bombing of a Doctor's Without Borders hospital in Kunduz City where over 20 non-combatants were killed during an AC-130 attack. Another thorny issue was the taking of a provincial capital by the Taliban (Kunduz City) - certainly not a good news for some who would like to say that the Afghan security forces are getting better. In fact, General Campbell made it known that he supports a plan that would leave more troops in Afghanistan than is currently planned after 2015 and 2016. You can watch a video (more than 2 hours long) of his testimony before the Senate Armed Services committee held on Tuesday, October 6th, 2015. Several media outlets reported on his testimony. Read more in a news report by U.S. News & World Report, October 6, 2015. See also "Top US General in Afghanistan: Afghan Security Forces Could Potentially Collapse", The Diplomat, October 7, 2015. Not to be outdone, the U.S. DoD has issued its press release on the testimony with "Afghanistan at 'Critical Juncture', Campbell says", Defense Media Activity, October 8, 2015.