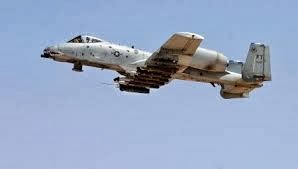 Film footage has been released depicting the exploits of an A-10 Fighter Squadron in Afghanistan during the fighting season of 2014. The story illustrates the essential role of the A-10 Warthog along with the Joint Terminal Attack Controllers (JTACs) providing close air support to the ground troops in Afghanistan. The importance of air support to a counterinsurgency fight cannot be overstated. It appears the documentary has been created by Combat Camera airmen - probably based at Bagram Air Field. The video is about 22 minutes long and includes combat footage. It has not been officially released by the Air Force - most likely because it casts the A-10 in a very favorable light at a time that the Air Force is hoping to kill the A-10 in order to free up funds for its very disappointing and extremely expensive F-35 Lightning II. Read more in "Hawg: The Story of the A-10 and Close Air Support in Afghanistan", John Q. Public, September 4, 2015. The video is embedded in the article and also available on YouTube at this link. www.youtube.com/watch?v=_L_TjXXx7eQ

Email ThisBlogThis!Share to TwitterShare to FacebookShare to Pinterest
Labels: close-air-support