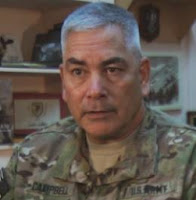 General John Campbell is the commander of the Resolute Support Mission in Afghanistan. He started out as the Commander of the International Security Assistance Force or ISAF in the summer of 2014 and then transitioned to command Resolute Support in December 2014. By many accounts he has done a fine job (an assessment I would agree with as well). It would seem that Gen Campbell wields considerable influence within the Afghan government - starting at the top with President Ghani. His influence is enhanced by two factors. One is that the Afghan Ministry of Defence (MoD) has no confirmed Minister of Defence - only one who is an acting minister (thus less influential). Another is that the Taliban have yet to be defeated and appear to have the ANDSF on the defensive - therefore the Afghans are relying more heavily on Gen Campbell (and his air power and SOF assets).

One bright note (according the the news report cited below) is his lack of hesitation in recommending transfers or dismissals of senior Afghan military officers (many - or most - are incompetent and corrupt). This is something that was not done enough by previous COMISAFs (or perhaps they made the recommendations but the MoD and Karzai blew them off). The NATO mission in Afghanistan is Security Force Assistance - or "Train, Advise, and Assist - TAA" in the 8 Essential Functions. However, the Americans also have complimenting missions of counter terrorism and close air support. Many of the U.S. SOF are on the ground conducting the TAA mission during combat missions while other NATO countries (for the most part) stay on large bases for their missions.

Email ThisBlogThis!Share to TwitterShare to FacebookShare to Pinterest
Labels: COMISAF