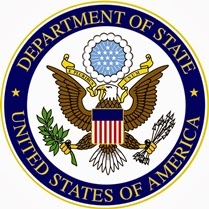 The U.S. Department of State has published online a "Background Briefing on Afghanistan" dated September 24, 2014. The briefing (because it is "background") is attributable to a "Senior State Department Official". The briefing was presented to provide an update on what is going on in Afghanistan in regards to the election results and 'unity government agreement" and then it was opened to questions.

In the brief the State participants outlined the role that State played in the resolution of the Afghan election mess, highlights the challenges ahead (security, political, and economic transitions), emphasized that the two presidential candidates will work well together, the current Afghan fiscal crisis, the inauguration date is set, prospects of peace talks with the Taliban, and state that the signing of the Bilateral Security Agreement and NATO SOFA is not far away.

Of course, the more interesting aspects of these "off the record" State Department briefings the correspondents ask. Such as "Why were the results of the vote not released?" and does the State Department think these elections " . . .were free and fair and transparent and open . . . ". The pros are good at skirting the truth. You can view the background briefing online here at the State Dept portal:
www.state.gov/r/pa/prs/ps/2014/09/232078.htm
Posted by Afghan War Blog at 1:30 AM