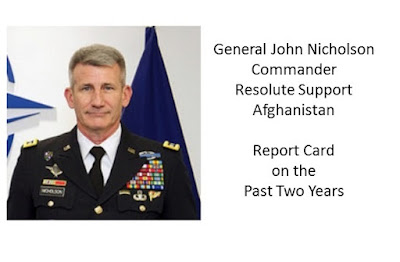 General John Nicholson has completed two years as the commander of NATO's Resolute Support Mission in Afghanistan. He took on a challenging task at a time when resources available were minimal and the Taliban were experiencing a resurgence. His tour was marked with a deteriorating security situation - the Taliban today control or contest more territory than at any other time since they lost power in 2001. The Afghan government is experiencing a crisis with infighting between the camps of President Ghani and Chief Executive Officer Abdullah. Strong political figures like Dostum, Noor, and Raziq are challenging the legitimacy of the National Unity Government (NUG). The list of adverse conditions Nicholson faces is extensive.

However, he seems to have managed a difficult situation given the constraints he is working under. He and his staff - working with the Afghan government, CENTCOM, DoD, and NATO - have pushed forward a strategy that was approved by the presidential administration. This new strategy provides for greater authorities, more air support, advisors closer to the front lines, and a modest increase in troop levels. It may buy more time for the Afghan security forces to finally force the Taliban to the negotiating table.