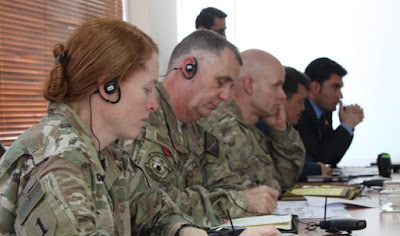 
Reporting on the 'Train, Advise, and Assist' Mission. The renewed emphasis and modest increase in the advisory effort with the Afghan National Defense and Security Forces (ANDSF) will not win the war; however, it is an important component of the U.S. and NATO strategy for Afghanistan. For that reason, the Afghan War Blog will continue to report on Security Force Assistance efforts by NATO and other Coalition / Partner nations.

NODs and the ANDSF. One one of the more important pieces of equipment when trying to 'own the night' is access to night observation devices (night vision goggles or night vision goggles). Attempts in the past to equip Afghan forces with NODs were half-hearted and lacking accountability. At one time, the issue of NODs was suspended because the ANDSF couldn't track the whereabouts of the NODs. The fear was that they had fallen into the hands of insurgents. In addition to the accountability problem (halting the provision of NODs) there is the bureaucracy and cost involved. So the simple solution of "Just give them NODs" is actually very complicated. Read more in an article by Sunny Petzinger - a member of the Civilian Expeditionary Workforce detailed to the Army to work as a Political and Civil Affairs Advisor based in Kandahar from 2016-2017. Read "When Made-in-the-USA isn't Afghan-Good-Enough", Small Wars Journal, March 5, 2018.

"Temporareality" and Advising. Greg Kleponis, is a retired USAF Colonel who has served in advisory capacities in both Iraq and Afghanistan during the last 10 years. His most recent post was as Senior Advisor to the Deputy Minister of Interior (Afghanistan) where he served as an advisor on security, anti-terror, and rule of law programs. Read his very interesting article entitled "Temporareality: Permanent Contingency Operations and the Pervasive Influence it Has on Military Operations & Culture and the Afghan Perceptions of Commitment", Small Wars Journal, March 7, 2018.

Video about 1st SFAB. On March 5, 2018 the U.S. Army published a video about the 1st Security Force Assistance Brigade - now on deployment to Afghanistan.
www.sof.news/video/video-1st-sfab/