Development and Economic News about Afghanistan 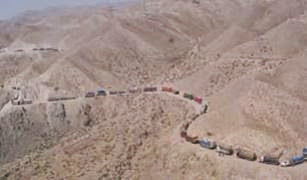 Lapis Lazuli Route. A planned transit corridor is expected to play a significant role in the growth of Afghanistan's economy. The Lapis Lazuli Route will connect Afghanistan with Central Asia and beyond into Turkey and Europe. (Tolo News, Feb 28, 2018).

Central Asian Railroad Could Benefit Afghanistan. Uzbekistan has repaired a section for railway that links it to southern Tajikistan. Rail service could resume in March 2018. In theory, this could also enable increased trade with Afghanistan. (Eurasia.net, Feb 28, 2018).

Greenhouses in Afghanistan. The use of plastic and bamboo can help an Afghan farmer transition from poppies to high-end cash crops like grapes, walnuts,apples and almonds. Read more in "How Greenhouses are Warming Afghanistan up to Peace", MSN News, March 2, 2018.

Mining in Afghanistan - It's Complicated. News reports indicate that a few American firms are looking at having a role in developing the coal mining industry in Afghanistan. This is seen by some observers as something that would bring benefits to the local community and that is an economic venture unlikely to be vulnerable to the Taliban. Catherine Putz looks at the history of mining and concludes that coal mining by Americans probably wouldn't work out so well. Read "Why the Americans Shouldn't Dig for Coal in Afghanistan", The Diplomat, February 28, 2018.