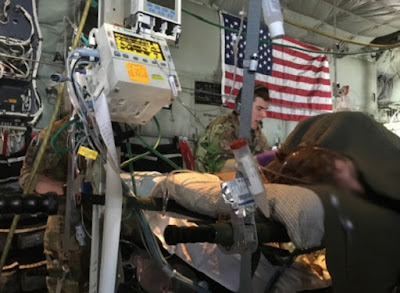 455th EAES - Saving Lives in Afghanistan. Based at Bagram Airfield, the 455th Expeditionary Aeromedical Evacuation Squadron is tasked with transporting injured, sick, and wounded personnel to a medical facility.  The unit will transport (and provide medical care to) patients from medical treatment facilities within Afghanistan to specialty treatment facilities. Read "AE team cares for patients in the air", DVIDS, March 12, 2018.

SEC DEF in Afghanistan. While enroute to Afghanistan Secretary of Defense Mattis held a 'press gaggle' with reporters traveling with him. His forecast for Afghanistan? (DoD News Transcript, March 12, 2018).

"We do look towards a victory in Afghanistan. Now, what does that victory look like? It's a country with its own people, and with their security forces, and won law enforcement. Any threats, using their own security forces; certainly, with international support for years to come. As they get better, obviously, the international support will be moderated, as the Afghan forces are able to do more. We see that already, when you compare the number that we have there today to the number we had there years ago."


TIP and Taliban Working Together. The Turkistan Islamic Party (TIP), a largely Uighur jihadist group affiliated with al Qaeda, seems to be working alongside the Taliban in northern Afghanistan. The group recently released a video highlighting its activities. TIP is also known as the East Turkistan Islamic Movement (ETIM). The group has been known to operate in Pakistan, China, Central Asia, Pakistan, and Syria. The TIP has utilized Taliban training camps in Pakistan to train their fighters. See "Turkistan Islamic Party highlights joint raids with the Afghan Taliban", LWJ, March 12, 2018.

"Not a Forever War". The U.S. Ambassador to the United States has a very optimistic view on the current situation in Afghanistan. "Afghanistan Is Not A Forever War, Its Ambassador Tells T&P", by Jeff Schogol, Task and Purpose, March 14, 2018.

Guardian Angel Team for Afghan PR Mission. The Army and the Air Force are working together in a joint venture to provide the capability to conduct personnel recovery (PR) missions in Afghanistan. (DoD, Mar 9, 2018).

A-29 Crash Investigation. The U.S. is providing A-29 Super Tucanos to the Afghan Air Force. In addition, pilot training is taking place in the U.S. A year ago one of the A-29s crashed in the vicinity of Moody Air Force Base, Georgia. The Afghan student and U.S. instructor pilot were able to eject safely (at 300 feet). Read "A-29 Crash at Moody Was Result of Abrupt Engine Malfunction: Report", Military.com, March 8, 2018.

Airstrikes in Helmand - Mixed Results. Despite a huge increase in the number of Coalition and Afghan use of air power in this southwestern province of Afghanistan the Taliban still control, contest, or dominate 12 of the 14 districts. While the bombing attacks will help defeat the insurgents in a battle with the ANDSF the insurgents will rebound and occupy the areas cleared. Read "Airstrikes Deliver Mixed Results in Frontline Afghan Province", Gandhara, March 16, 2018.

Building up the AAF. An informative article about how the U.S. plans to increase the size of the Afghan Air Force. "CENTCOM Aiming to Build Afghan Air Force Into a Key Offensive Capability", Air Force Magazine, March 13, 2018.

U.S. Miliary Increases Kabul Presence. The Afghan capital has seen a significant increase in urban attacks over the past few years. The ANDSF seem to have problems coping with the terrorist bombings that kill scores of people each time. General Nicholson, Cdr of RS, says that the ". . . leadership element is key because what we found is many failures at the local level in terms of local security." Some members of the 1st SFAB are being assigned to the Kabul area to mentor Afghan police. Read "US focusing anti-Taliban effort inside Kabul", Military Times, March 14, 2018.

NATO's Annual Report for 2017. The North Atlantic Treaty Organization released its annual report that provides an overview of how NATO has become more agile and innovative in the face of a complex and evolving security environment. Part of that environment is Afghanistan. The report is 120 pages long; the Afghanistan annex is found on page 102.
www.nato.int/cps/en/natohq/opinions_152797.htm

Anar Dara District Falls to Taliban. On Monday, March 12th, insurgents attacked a district center in Farah province and took control of the district headquarters. Some press reports says that remnants of the ANDSF were holding out in some district government and military buildings awaiting relief from the Afghan security forces. Farah province has seen a steady decline in security over the past two years. In January the governor of Farah province resigned citing deteriorating security; blaming the problems on political interference and corruption. See "Taliban Overruns Afghan District Near Iranian Border", Voice of America, March 12, 2018.

Battle for Faryab Province. The Taliban control the majority of the 15 districts in this northern Afghan province. The provincial capital is also being threatened by the insurgents. Government and international troops (SOF) are currently in operations to push the insurgents away from the capital city and to clear the major roadways. The capture of the provincial capital - even for a short time - would be a propaganda victory for the Taliban. Read a detailed report on the security situation in Faryab province by Kate Clark of the Afghanistan Analysts Network (AAN), March 12, 2018.