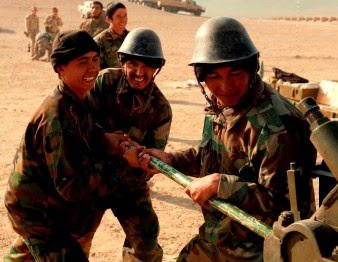 Afghan Commandos Suffer Casualties. Initial news reports in Afghan media say that Afghan SOF endured some heavy losses in Farah province (western Afghanistan). The province has seen a rapid deterioration in security over the past two years and a growth of the insurgency's strength. According to one news report a Commando element was in an engagement where it suffered 35 KIA and 17 WIA on / about March 10th. Over the past several days ASSF have conducted a number of offensive operations against the Taliban, Tehrik-I Taliban, ISIS-K, and Haqqani. Read a recent new release by Maj Anthony Mayne of NATO Special Operations Component  Command - Afghanistan (NSOCC-A) in "Afghan SOF raids and U.S. airstrikes target weapons facilitators", DVIDS, March 9, 2018.

Female Police Officers. Read the story of a women who works as a police officer in southern Afghanistan. When her husband, a police officer, was killed by the Taliban she needed a way to support her family (four small children). Read "Female police officers help security on Afghan front line", Reuters, March 8, 2018.

"Great Northern Council". Local Afghan leaders in and around the Bagram Air Field area have joined together with Resolute Support representatives to enhance cooperation and security. (DVIDS, Mar 1, 2018).

Germany to Raise Troop Level. The German cabinet approved plans to expand Germany's mission in Afghanistan - bringing the total number of troops to 1,300. Germany is the lead nation for the Train, Advise, and Assist Command - North (TAAC North). (Reuters, Mar 7, 2018).

US Granted Access to Kazakhstan Ports. Government officials of Kazakhstan say that the U.S. can ship material and equipment across the Caspian Sea to ports in their country. From there the goods can be shipped by rail or truck through Uzbekistan and then into northern Afghanistan. This will partially relieve the pressure of dealing with either the Russians, Pakistanis, or Iranians to ship material and equipment to support the war effort in Afghanistan. Using this route will provide relief from the problematic northern distribution network used in the past. (Tolo News, Mar 8, 2018).