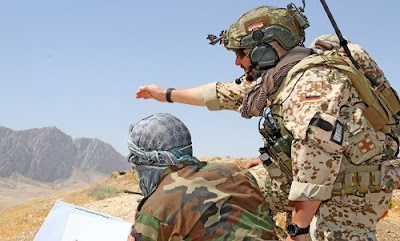 New Cdr for NSOCC-A / SOJTF-A. It appears that an Air Force two-star will be the next commander for the Special Operations Joint Task Force - Afghanistan (SOJTF-A). Major General Albert Elton has been selected to command NSOCC-A/SOJTF-A - the organization that all U.S., NATO, and Coalition SOF falls under. Read his biography here.

German National Captured with Taliban. A German national is suspected of advising the Taliban - he was arrested by Afghan commandos in Helmand province on February 27, 2018. (VOA, Mar 1, 2018).

Two Australians Wounded. A car bomb detonated close to a convoy of vehicles in PD9 on Friday, March 2nd that injured two Australians. The incident occurred near the Australian Embassy. (Tolo News, Mar 3, 2018).

Operation Anaconda - March 2002. Quite a few years ago, one of the biggest battles of the early Afghan conflict took place. During this period the U.S. airlifted some 1,700 troops and accompanied over 1,000 pro-government Afghan militia forces to take on al-Qaeda and Taliban fighters in the mountains of eastern Afghanistan in Operation Anaconda. (Special Operations.com, March 2, 2018).

RS HQs Denying ISIS in Afghanistan? Russia has accused the United States and Resolute Support of denying that the Islamic State has a presence in Afghanistan. Well, an examination of the public statements by RS HQs, DoD 1225 reports, SIGAR reports, and other documents say otherwise. Although the numbers game is often subject to questioning there is no doubt that there is an acknowledged threat from ISIS-K. (Polygraphy.info, Feb 26, 2018).

How the Taliban Survive & What to Do About It. The security situation in Afghanistan continues to deteriorate, the insurgency is increasing, and the international community and Afghan government lacks clear direction. So says an editorial entitled "How to Tackle the Taliban", Daily Outlook Afghanistan, March 4, 2018.

District Control in Jawzjan Province. It is always interesting to contrast the statements of the Government of Afghanistan and Resolute Support Headquarters about who 'controls' and 'contests' district across Afghanistan. For instance, there are a couple of districts in Jawzjan province in northern Afghanistan where the district center flies the Afghan flag and a handful of Afghan National Police guard the district center walls; but where insurgents (and militias) freely roam the entirety of the district outside of those walls. For a peak at what 'district control' looks like on the ground check out "Precarious Consolidation: Qari Hekmat's IS-affiliated 'island' survives another Taleban onslaught", Afghanistan Analysts Network (AAN), March 4, 2018.

An Insurgent's Perspective. The story of Hajji Amanullah is one of a long-time insurgent based in eastern Afghanistan. "US Drone Strike, Political Betrayal Drove Aging Afghan Militant Closer to Islamic State", Eurasia Review, March 2, 2018.

Khakrez District - Controlled by Taliban. The FDD's Long War Journal has assessed a northern district of Kandahar province as controlled by the Taliban. The district of Khakrez is a rural agrarian community of about 20,000 people. Read "Taliban flaunts apparent control in Kandahar district", LWJ, February 28, 2018.