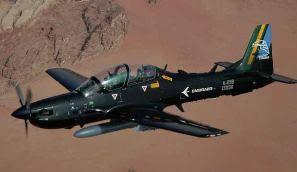 'Operators' Graduate from ATAC. Special Operators with the Afghan National Army Special Operations Corps and General Command Special Police Units graduated from the ATAC Course at the ANASOC School of Excellence on Feb 1, 2018. Some of the graduates will move on to the ANASOC Air Targeting Officer's  Course to learn how to prepare A-29 fixed-wing and MD-530 light-attack helicopter strike packages. Read more in "Afghan Tactical Air Controllers bring more firepower to the battlefield", NSOCC-A / DVIDS, February 1, 2018.

RS General Offers 'Glowing' Assessment of AAF. MG James Hecker, director of NATO Air Command - Afghanistan, held a press conference on February 7, 2018. The general is very high on the present and future capabilities of the Afghan Air Force (AAF). As usual, he provides the ever-present statement that "The Taliban cannot win on the battlefield". This, despite the fact, that the rural-based insurgency controls or contests probably 60% of the 399 districts in Afghanistan. In this RS HQs press release he says that ". . . they tried taking districts and couldn't do that either". Perhaps he should learn a little bit about how insurgencies operate and what constitutes 'district control'. Despite the cheer-leading content the RS article is a good indication on how well the AAF is progressing as increases its capacity and capability. Read "Afghanistan's Military Primed to "Cripple" Enemies, Thanks to Increased Air Capabilities", Resolute Support, February 7, 2018.

B-52 Strike on Insurgents in Badakhshan Province. A U.S. Stratofortress dropped 24 precision guided bombs on insurgents close to the China and Tajikistan border. The East Turkistan Islamic Movement (ETIM) is operating in the region and reportedly use some training camps also used by the Taliban. It is unknown if any ETIM fighters were actually in the training camp during the strike.. See "New U.S. air campaign expands to the north", Resolute Support, February 6, 2018. Read more about the strike on the ETIM in a DoD news release (Feb 7, 2018).

Bombing Afghan Drug Labs? Resolute Support recently applauded its success in inflicting serious financial losses on the Taliban's financial operations when it conducted an extensive bombing campaign against drug labs in Helmand province. But some observers think that RS HQs has inflated the damage done to the Taliban. US Forces Afghanistan (USFOR-A) says that $80 million in damage was inflicted on 25 drug labs. It is an important distinction; especially when considering that some of the aircraft used include the F-22 Raptor with an operating cost of $70,000 per hour. Read more in "Doubts rise over effectiveness of bombing Afghan drug labs", Air Force Times, February 6, 2018.

Video: B-52 Strike on Helmand Province Drug Lab. Watch a video of a Stratofortress hitting a drug lab. (DVIDS, Feb 2, 2018).

A-29s and Laser-Guided Bombs. The Afghan Air Force just started to use laser-guided munitions with their new A-29 Super Tucanos. In addition, some of the C-208 aircraft will be outfitted with laser-guided rockets. How soon the AAF will be able to employ these modern munitions remains to be seen. (Khaama Press, Feb 8, 2018).

AAF is Increasing Its Capability and Capacity . . . But. A lot of news stories are coming out about how the Afghan Air Force will be a game-changer resulting in the defeat of the Taliban. This article is one more such news report. But my question is: "When is the last time air power defeated an insurgency?". Read "Why the Taliban Should Fear the Afghan Air Force", The National Interest, February 8, 2018.

SMW Instructor Pilot Talks about his Job. A pilot with the AAF's Special Mission Wing talks about his job in this short video posted on DVIDS (Jan 8, 2018).