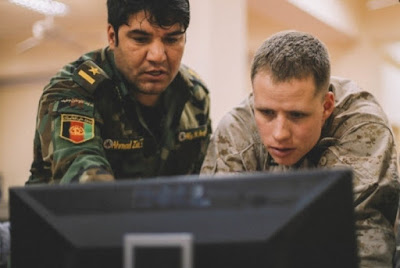 New DCoS Ops for RS. BG (P) Dan Walrath will soon be back in Afghanistan. He did a great job as cdr of 2/101st in RC East. The Strike BCT was one of the first SFABs to deploy to Afghanistan in 2012. 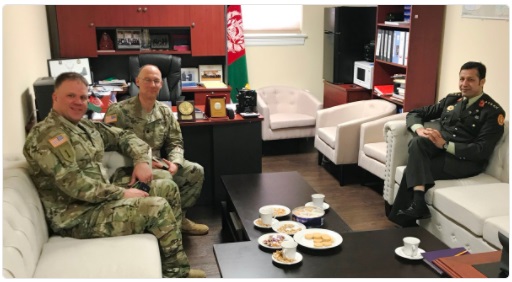 The Afghan military attache at the Afghan Embassy in D.C. meets with
two U.S. Army officers to discuss the training of the ANDSF.

Marines to Lease Reaper Drone for Helmand. The Marines assigned to Task Force Southwest are looking to use an armed drone to keep an eye on things in Helmand province while they conduct their 'advise and assist' mission. Read "Marine Corps Wants Reaper Drone to Provide Overwatch for Helmand", Defense Tech,  January 29, 2018.

Some Familiar Themes Here - Vietnam and Afghanistan. Read "US Combat Advisors in Vietnam Knew the Score and Got Ignored", by James A. Warren, The Daily Beast, February 2, 2018.

Breaking News - COIN Actually Worked in Vietnam. J. R. Bullington, a man who spent considerable time in Vietnam, writes on how counterinsurgency actually was the right strategy in Vietnam. Other factors contributed to the lost effort; but not COIN. "Assessing Pacification in Vietnam: We Won the Counterinsurgency War!", Small Wars Journal, March 23, 2012.


News on the 1st SFAB


1st SFAB - "Fully Capable".  On February 8, 2018 the 1st Security Force Assistance Brigade will be recognized as fully capable at a ceremony at Fort Benning, Georgia. The 1st SFAB is scheduled to deploy to Afghanistan this spring.

SFAB Recruiting. The U.S. Army is on a big push to recruit for the six Security Force Assistance Brigades (SFABs) that it is in the process of standing up. The first one was brought online in August 2017 at Fort Benning - it has finished its training and will deploy to Afghanistan soon. The 2nd SFAB is now forming at Fort Bragg. The SFABs, 800-men strong, are key to the U.S. efforts to advise foreign military forces. Read "Event highlights options in Army", Fort Hood Sentinel, January 25, 2018.

Modernization and Equipping the SFAB. Standing up a brand new unit like the 1st SFAB (August 2017) and deploying it within its first year of existence poses an number of huge problems. One of which is fielding the equipment for a new brigade (yes it is undersized in strength but still . . . ) In addition, the U.S. Army wants it to have the latest and greatest in equipment (more fielding and training issues there as well). Read more about the latest of comms gear going to the 1st SFAB in "A special Afghan unit could be the Army's test case for its future network", C4ISRNET, February 2, 2018.

1st SFAB EOD Specialists. An EOD specialist talks about his assignment to the 1st SFAB and it's impending deployment to Afghanistan. (DVIDS, Jan 23, 2018).