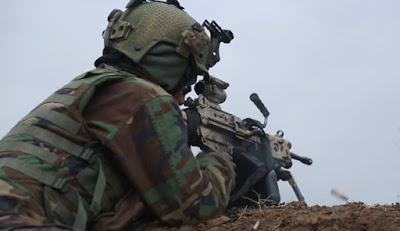 Insider Attack - Helmand Province. Sixteen members of a National Directorate of Security (NDS) unit were killed by four of their colleagues in an 'insider attack' on Feb 11th, Sunday. (VOA, Feb 11, 2018).

Sangorian. A secret unit established by the National Directorate of Security (NDS) is causing some angst within the Taliban movement in Helmand province. (Gandhara, Feb 15, 2018).

777th SMW on Display. Senior officials of Central and South Asian countries visited the Special Mission Wing on Feb 13th for a static display of its men and equipment staged at Kabul's international airport. The static exhibit was held at the end of a two-day CASA Chiefs of Defence conference. (Resolute Support, Feb 15, 2018).

More U.S. Airpower. The U.S. has increased its air assets in Afghanistan which will provide a decisive edge in the fight to destroy Taliban networks and enable air support to U.S. personnel embedded with the ANDSF. (455th Air Expeditionary Wing, Feb 16, 2018, DVIDS).

Retiring the Old Generals. The Afghan military has more general officers than the U.S. Army. Many of them don't have a real job . . . and if they do . . . well that's another story. Read more in "Afghan army shake-up to push out old guard in fight against Taliban", Reuters, February 14, 2018.

Badakhshan Province Threatened. A recent news report provides information on how the Taliban and other foreign fighters are increasing their control of some of the districts in Badakhshan province. Read "Taliban Increasing Presence in Remote Afghan Region Bordering China", Gandhara, February 12, 2018.