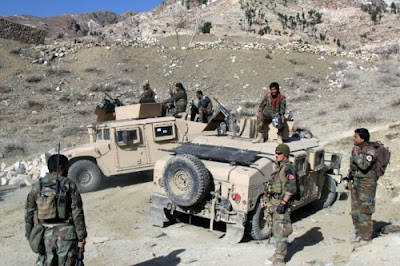 Retiring the Old Guard. President Ghani signed documents that 'gracefully' retired 164 general officers. The Afghan security forces have an excessive number of generals and it is time to see some of them go home and collect their pension. Many of the generals were too old, inept, useless, corrupt, and . . . in many instances . . . did not have a real job. I am sure there was a fair degree of politics involved but still a good step forward!

Quantity over Quality? There are over 2,500 trainees currently enrolled in the 14-week long Afghan Commando qualification course at Camp Commando (Morehead). The intent is to double the size of the Afghan Special Security Forces (ASSF). Hopefully ANASOC is not sacrificing quality to obtain quantity (SOF Truth #2). (NSOCC-A, Feb 7, 2018).

Examining Recent Terrorist Attacks. The past few months have seen an increase in terrorist attacks in Afghan cities. Thomas Ruttig, of the Afghanistan Analysts Network (AAN), takes a close look in Five Questions to Make Sense of the New Peak in Urban Attacks and a Violent Week in Kabul, AAN, February 5, 2018.

District Policemen Working in Provincial Capital. One of the many reasons that Helmand province suffers from insecurity is that many of the policemen who are assigned to districts are in the provincial capital guarding officials and politicians. For instance, 94 policemen and officers from Kajaki district are currently serving in Lashkar Gah. Read more in "Afghan Police Protect Officials, Not Public, In Frontline Province", Gandhara, February 8, 2018.

NSOCC-A General Taking Off. BG Kirk Smith, currently DCG of NATO's SOF in Afghanistan, is heading to Europe to take command of SOCEUR.

China as a CT Partner in Afghanistan? Hmmm. The recent bombin in Badakhshan province of training camps run by the East Turkestan Islamic Movement (ETIM) could be the forerunner to an increased degree of cooperation with China. See "Pentagon thinks China could be a partner in Afghanistan", Military Times, Feb 8, 2018.

Afghan Officers Fired Over Kabul Attack. Afghan President Ghani says that seven Afghan army officers - including two generals - have been dismissed for "professional negligence" during a recent deadly attack on a Kabul military base by the Islamic State Khorasan Province (ISKP). (Gandhara, Feb 6, 2018).