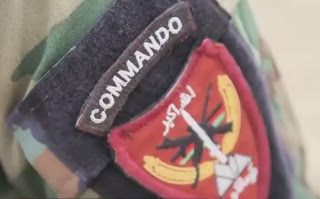 "Clear, Hold, and Build?" The Afghan army - using its Commandos - has the "Clear" part of counterinsurgency down pretty good. It is the "Hold" and "Build" part that historically the ANDSF do not do well. Read an example of this weak area in "Northern offensives conducted by Afghan Army achieve impermanent gains", FDD's Long War Journal, January 31, 2018.

Afghan Commandos. Marty Skovlund Jr, a writer for Task & Purpose, recently visited Camp Commando (just outside of Kabul) where the Afghan Commandos are trained. He provides us with an excellent article describing the Commandos training, mission, and motivation. Read "With The Taliban On The Offensive, The Future Of Afghanistan May Depend On This Homegrown Commando Force", January 29, 2018.

"A Bloody Start to 2018". Why has there been an uptick in violence in Afghanistan - especially in Kabul? Some observers believe that it is the Taliban's response to President Trumps new strategy in South Asia, Trump's statements and actions against Pakistan, and the winter offensive conducted by the ANDSF (along with U.S. bombing). Read "Taliban attacks cast doubt on US' Afghan Strategy", Deutsche Welle, January 29, 2018.

Military University Attacked. On Sunday, January 28th two suicide bombers detonated their explosives at the gate of the Marshal Fahim Military University in Kabul. Two other attackers were killed in the fight and one attacker was captured by the ANDSF. The attack was the fourth major assault in a surge of violence in just over a week . . . and the fighting season has yet to begin. both the Taliban and the Islamic State - Khorsan Province appear to be increasing their attacks in Kabul.  "Eleven Afghan soldiers killed in latest attack in Kabul", Reuters, January 28, 2018.

More on Kabul Bombing. The recent bombing on Saturday, January 27th by the Taliban using an ambulance has resulted in 103 deaths and 235 wounded. It appears the emergency vehicle was waved through one checkpoint but then was stopped at a second checkpoint - when it detonated.

Some Good News? Evidently all is not all 'doom and gloom' in Afghanistan. Not if you read one of Resolute Support's recent press releases - "Afghan forces apply pressure to insurgents with renewed resolve", RS HQ, February 1, 2018. While RS HQs acknowledges that there have been some significant attacks in Kabul; it provides examples of how the ANDSF (especially SOF) are making headway. And there is this statement by Gen Nicholson (RS Cdr):


Our mission is boosting troop numbers, which really means that our Train, Advise and Assist Mission will go even deeper inside the schooling and education system, and with the forces on the battlefield.

Analysis and Commentary on Security Situation in Afghanistan

Trends in Afghan Security. The folks at the Afghanistan Analysts Network (AAN) have provided us with a detailed analysis of how security is trending in Afghanistan over the past several years. The news is not good. The writer, Thomas Ruttig - a man with extensive time in Afghanistan, looks at five major indicators of security in 2017 and compares it to data from earlier years. He finds that the Afghan War has become more violent and widespread in 2017. Read his very detailed analysis in "More Violent, More Widespread: Trends in Afghan Security in 2017", AAN, January 29, 2018.

Options for Success Limited. According to Bennett Seftel, director of analysis at The Cipher Brief, options for the Afghan conflict are not good. See "Afghanistan Quagmire Leaves U.S. With No Good Options", February 1, 2018.

Battle for Kabul and Beyond? The recent spate of terrorist attacks in Kabul highlight what may be a coming bloody year in Afghanistan. Read an analysis of the security situation in Afghanistan by Nafisa Hoodbhoy in "Analysts: Battle for Kabul Has Begun", Voice of America, January 28, 2018.

Info Withheld in SIGAR Report. The Pentagon and Resolute Support HQs has removed information previously published in the unclassified Quarterly Report to Congress. The January 2018 has little information about the Taliban's ability to 'control or contest' districts in Afghanistan. Previous reports always contained this info. Read "Watchdog: Pentagon blocks information on insurgent dominance in Afghanistan", Stars and Stripes, January 30, 2018.

Taliban Gaining Strength? Recent DoD and SIGAR reports along with analysis from outside media outlets and think tanks indicate that the Taliban certainly are not using . . . and depending on the metrics used . . . could possibly be tilting the 'stalemate' to the insurgency's favor. Read "The Taliban is gaining strength and territory in Afghanistan", NBC News, January 30, 2018.

Retiring the 'Old Generals'. There are a lot of Afghan generals on the payroll; many of whom don't have a real job. Even worse is that some of those that do show up for work are corrupt and inept. One of the key elements of professionalizing the Afghan National Defense and Security Forces that Resolute Support has encouraged the Afghans to adopt is changing out the senior leadership. But there are those who oppose this approach (of course). (Tolo News, Jan 29, 2018).

Spies Within ANDSF? Are there informers who report to insurgents currently working within the Ministry of Interior and Ministry of Defense? MININT Wais Ahmad Barmak believes that is the case. Read "Insurgents Have Spies Among Security Forces, Barmak Says", Tolo News, January 28, 2018.

Talking to the Taliban? Not so Much. One of the aims of the U.S. government is to use all means available (military, diplomacy, etc.) to bring the Taliban to the negotiating table for a political settlement. On Monday, January 29th this was all put aside by President Trump when he said "I don't see any talking taking place . . ." during a televised meeting at the White House. The remarks were 'off the cuff' and probably reflected his thoughts after several recent bombings by insurgents in Kabul that killed a lot of innocent people.

Facts and Figures. Statistics can be shaped into many different forms to help convey a message or sway the conversation. The Afghan conflict is certainly a war with many different points of view - many that use data points to present their respective perspectives. Scott Peterson writes on this in "Afghanistan by the numbers: inside the fight over facts", February 2, 2018.