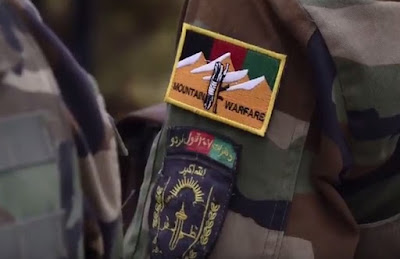 Photo Credit: Shoulder patch of the Mountain Warfare Training Center in Herat province, Afghanistan. The training center was established so Afghan forces could practice advanced mountain warfare techniques and urban combat skills. The advanced training was developed by the Italian Alpine Troop, or Alpini (considered some of the best mountain warfare troops in the world). Photo from Resolute Support video published on November 27, 2017.

Operation Maiwand 8 Concludes. The Afghan security forces successfully conducted a resupply mission over the course of November 18-21 to provide food,water, blankets, mattresses, and winter uniforms to security forces based in Marjah district. The operation, spanning days, involved numerous units across the spectrum of the ANDSF that delivered needed supplies for the district center to remained provisioned through the coming winter months. Read a glowing report on the effort in "Winter no longer a barrier to ANDSF operations in Maiwand", Resolute Support, December 2, 2017.

ISIS Deputy Joins Taliban. The Afghan Taliban claims that the deputy head of the Islamic State - Khorsan Province has parted ways with IS-KP and is now with the Taliban. (VOA, Nov 30, 2017).

Pakistan and the Haqqani Network. General Nicholson has once again spoken out about Pakistan's support for the terrorist group operating from within Pakistan's borders. He says there is no change to the help provided by the Pakistani spy agency. Read "Haqqani Network Remains Primary Source of Pakistan - US Tensions", Voice of America, November 27, 2017.

Three Georgian Soldiers Wounded. Members of a Georgian patrol were wounded when their vehicle was attacked by a motorcycle-borne IED outside of a military base in Kabul. (Bagram). (Reuters, Nov 23, 2017).

2018 a Pivotal Year. Paul D. Shinkman, a senior national security writer for U.S. News & World Report has provide us the reasons why 2018 is important to Afghanistan in "Victory or Failure in Afghanistan: 2018 Will Be the Deciding Year", November 27, 2018.

'Eating Their Own'. Fifteen members of the Islamic State in Khorasan Province (IS-KP) lost their heads in a recent spate of infighting in the eastern province of Nangarhar. The killings took place in the Surkh Ab bazaar of Achin district. Read "Islamic State beheads 15 of its own fighters: Afghan official", Reuters, November 23, 2017.