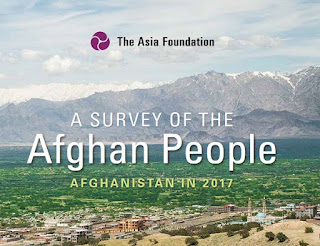 The Asia Foundation conducts an annual survey of the Afghan population and publishes a report on its findings in the fall of each year. The report covers several topics to include the National Mood, Security, Economy, Development, Governance, Politics, Media, Women in Society, and Migration. This years 267-page report is based on interviews of over 10,000 people across many ethnic groups from all 34 Afghan provinces.

Here is an abstract of the report provided by The Asia Foundation:

"Survey of the Afghan People polled 10,012 Afghan respondents from 16 ethnic groups across all 34 provinces, including insecure and physically challenging environments. The annual survey is the longest-running and broadest nationwide survey of Afghan attitudes and opinions. Since 2004, the Survey has gathered the opinions of more than 97,000 Afghan men and women, providing a unique longitudinal portrait of evolving public perceptions of security, the economy, governance and government services, elections, media, women’s issues, and migration."


You can download the report at the link below:

Analysis and Commentary on the Survey of the Afghan People: