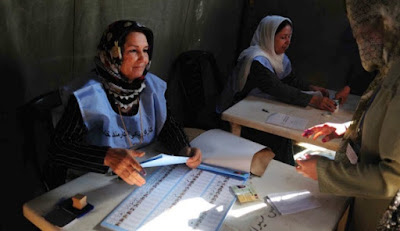 Elections and Female Participation. A symposium, backed by the United Nations, was held in Mazar-e-Sharif to discuss ways to improve women's participation in elections - as both voters and as candidates. There are plenty of laws on the books in Afghanistan providing for the rights of Afghan women to vote and to run as candidates for office. What is lacking is the generating of public awareness and the implementation of the laws. With the upcoming elections to be held in 2017 and 2018 various activist groups are working to increase female participation in the electoral process. Read more in an article posted by the United Nations Assistance Mission in Afghanistan (UNAMA), November 21, 2017.

Vice-President Dostum - Returns (Again). Every week news reports state that Dostum will make his return to Afghanistan after "receiving medical treatment in Turkey". And every week he is a no show. (Tolo News, Nov 18, 2017).

2014 Election Fraud Revealed. The former National Directorate of Security (NDS) Rahmatullah Nabil claimed the printing equipment for fake ballots for the 2014 election was found in the homes of people who are currently high-ranking members of the National Unity Government (NUG). (Tolo News, Nov 21, 2017).

Identity Documents. Most Afghans carry a handwritten ID card called a Tazkara; however, as many as one third of the country's population have no identity documents at all. The Afghan Population Registration Department is in the process to distribute handwritten identity cards to those without. Eventually, the office plans to issue electronic ID cards to the recipients of the current handwritten ID cards. Read "One in Three Afghans Lack Identity Documents", Gandhara Blog, November 16, 2017.

Ethnic Bias in Afghan Govt? A leaked memo from the Department of Public Order of the Ministry of Interior that stated recruits for a new anti-riot force should come from the Hazara, Uzbek, and Pashtuns - but not the Tajiks. Naturally, this has caused some concerns in Kabul. (Radio Free Europe, Nov 20, 2017).

UN Resolution. CEO Abdullah Abdullah addressed the United Nations General Assembly on Monday, November 20th. He briefed the delegates on the situation in Afghanistan and welcomed the UN's decision to adopt a resolution in support of Afghanistan. (Tolo News, Nov 21, 2017).