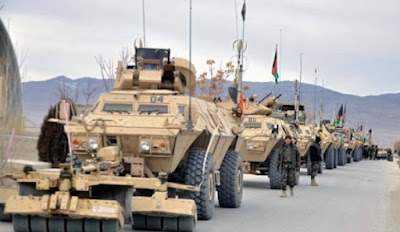 Attack on Iraq Embassy in Kabul. ISIS fighters attacked the Iraq Embassy and held parts of the first floor for about four hours on Monday, July 31st. The Afghan Crisis Response Unit (CRU) - an MoI SOF element - responded. No embassy staff casualties have been reported. The attack was initiated by a suicide bomber blowing himself up outside the gates - then followed by three gunmen who stormed into the building.

Insider Attack. A member of the Afghan National Civil Order Police (ANCOP) opened fire on coalition troops on August 5th. The Afghan policeman was killed. One Romanian soldier was wounded. This is the fourth insider attack so far in 2017.

Afghan Border Fight. Controlling the Afghan border is a losing proposition. Here's why. "The Battle for the Afghan Border", The Diplomat, August 4, 2017.

Shia Mosque Explosion. An explosion rocked the entrance of the Jawadia mosque in the western city of Herat on Tuesday, 1 August killing almost 29 people and injuring an additional 64. (Radio Free Europe, August 1, 2017).

IS-K Migrating from ME to Afghanistan? With fall of Mosul, tightening noose on ISIS in Syria, and displacement of ISIS in Libya many observers note that Afghanistan could see an influx of ISIS weapons, tactics and personnel. Read "Embassy, mosque attacks fuel fears ISIS bringing Iraq war to Afghanistan", Reuters, August 2, 2017.

HUMINT Program Draws Fire. The Special Inspector General for Afghanistan Reconstruction has issued a report critical of the Legacy and ASOMs programs that were meant to develop the human intelligence capability of the Afghan intelligence agencies. Read "SIGAR cites lack of oversight in $457M training program", Defense News, August 1, 2017.

Fight for the Districts. The latest report (30 June 2017) from the Special Inspector General for Afghanistan Reconstruction (SIGAR) stated that the control and influence of districts (there are about 400 districts in Afghanistan) remains about the same as last year. No gains or losses by the government forces or the Taliban. So the fights for districts continue. In the last part of August the Taliban took Janikhail district in Paktia province. This week the news is the government security forces from the 203rd ANA Corps and regional police zone have retaken the district after ten days of tough fighting. Reports on August 5th say the Taliban have seized control of Sayad district in northern Sari Pul province.

IS-K Thematic Dossier. The folks at Afghanistan Analyst Network (AAN) have been tracking the growth of the Islamic State Khorasan Province (ISKP) in Afghanistan for the past few years. AAN has published a number of articles and papers on ISKP and now they have assembled them into one pub. See "Thematic Dossier XV: Daesh in Afghanistan", AAN, August 1, 2017.

AAF Gets $4 Billion Expansion Plan. The United States is trying to get the Afghan Air Force to grow its capability and capacity. Read more in "U.S. Moves to Help Fledgling Afghan Air Force", Gandhara, July 25, 2017.

Help for the AAF via Blackwater? There is an acknowledge capability gap in air power and air support on the part of the Afghan government. After the Coalition forces pulled out the bulk of its air support the Afghan ground forces were left without aerial resupply, MEDEVAC, close air support, and ISR capability. Erik Prince, of Blackwater fame, has the answer. Read more in "Blackwater founder Erik Prince reportedly wants Afghanistan to use his private air force", Business Insider, August 2, 2017.