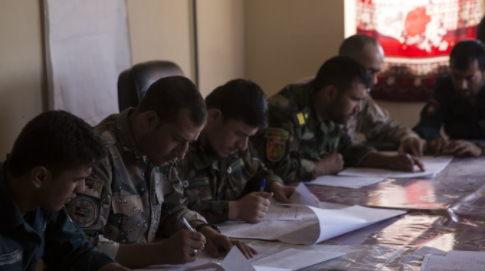 TF Southwest Advisors and Map Reading. After 17 years of conflict and training up the Afghan Army and police our advisors are still teaching basic map reading to Afghan soldiers and police. For the past three weeks U.S. Marines with Task Force Southwest conducted a map reading class for the Operational Coordination Center (OCC) at Bost Airfield, Afghanistan. Hmmm. I would think at this point we would be teaching some advanced topics like . . . I don't know . . . maybe the fine art and science of counterinsurgency. Is there anyone in Afghanistan teaching counterinsurgency? Is there a Counterinsurgency Academy somewhere in Afghanistan? Probably not. Read more in "Building the Foundation: Task Force Southwest teaches map class to ANDSF forces", DVIDS, July 23, 2017.

Great Progress? So the above article released by RS HQs would make you think that the Marine advisory mission in Helmand province is right on track. Ummmm, maybe not. Read "Marines facing 'discouraging' challenges in Afghanistan", CNN.com, July 23, 2017. 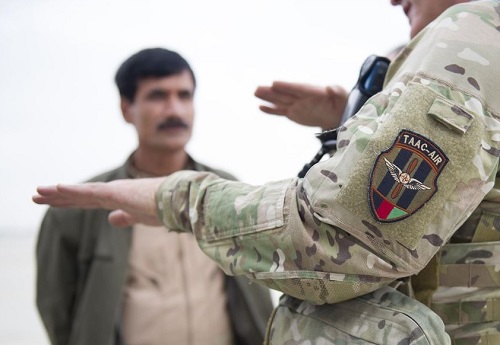 "Watch the Hands". Of course this TAAC-Air advisor is a pilot;
who else moves their hands like this in a conversation?
(USAF photo by Tech Sgt Robert Cloys, March 3, 2016).

TAAC Air Working with Afghan Air Force. A four-year, $7 billion expansion plan is designed to produce more flight and maintenance crews for the Afghan Air Force (AAF). According to Brigadier General Phillip Stewart, the commander of Train, Advise, and Assist Command - Air, "That is what will provide the asymmetric advantage to break the stalemate on the ground." Hmmmm. Really? A bigger Air Force is needed to defeat insurgents who practice guerrilla warfare? One that has no air force, no tanks, no armored personnel carriers, and no artillery? I believe the problems that the Afghan security forces have run much deeper than not having a big enough air force. But anyway, read "As U.S. weighs Afghan strategy, hopes set on fledgling Air Force", Reuters, July 23, 2017.

US SOF Trapped in Afghanistan. 70% of the offensive operations carried out by the Afghan National Defense and Security Forces (ANDSF) are conducted by Afghan Special Service Forces (ASSF) - the special operations units of the MoI and MoD. The principle advisors to these ASSF units are U.S. and NATO SOF. The worldwide needs of U.S. SOF is immense and the Afghan commitment sucks up a lot of the US SOF resources. Read more in "SOCOM Is In A Prison of Its Own Making", Task and Purpose, July 25, 2017.

Task Force Southeast - Collective Training and Leader Development. One of the serious deficiencies of the Afghan security forces is the lack of leaders in both the army and police that are competent. The advisors and trainers of Task Force Southeast are using the collective training model (combining the army and police) as a method to develop the ANDSF leaders. Read "Training Leader Development: Fundamental to Afghan National Security", DVIDS, July 27, 2017.

TAAC South Soldiers End Deployment. Soldiers from Task Force Rakkasan of the 3rd Brigade Combat Team have returned home after working in the train, advise, and assist mission at Train, Advise, and Assist Command - South (TAAC-South). They were based in Kandahar province but also provided coverage into Zabul, Uruzgan, and Helmand provinces. Check out pictures of their homecoming at Fort Campbell, Kentucky in "Photos: 3rd Brigade soldiers come home from Afghanistan", ClarksvilleNow.com, July 23, 2017.