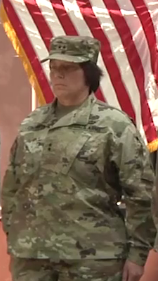 U.S. Army Major General Robin Fontes is now the commander of the Combined Security Transition Command - Afghanistan (CSTC-A). She assumed command on July 15, 2017. Read some news reports on the new commander responsible for working with senior Afghan leadership in the security force assistance mission. The outgoing CSTC-A commander, MG Kaiser, says gender issues remains one of the biggest challenges but he believes progress will be made under MG Robin Fontes. The TwitterSphere is alive with robust statements about how the new commander is the highest ranking female general officer in Afghanistan.