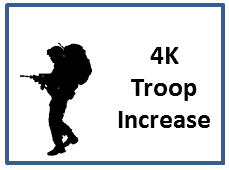 President Trump provided the authority to Secretary of Defense Jim Mattis to determine the troop levels for the U.S. presence in Afghanistan. Over the past few months we have seen press reports and testimony before Congress indicating that the military chain of command (Resolute Support, CENTCOM, etc.) had recommended an increase of 3-5 thousand U.S. troops. It appears that SECDEF Mattis will honor that request and he is expected to announce troop movements at some point next week. Along with this U.S. troop increase there is an expectation that NATO and other partner coalition nations will increase their level of troop deployments as well. Many countries (United Kingdom, Germany, etc.) have already announced their intention to increase their troop levels.

What Will These Troops Do? The U.S. has two missions in Afghanistan. One is the counterterrorism (CT) mission and the other is the "Train, Advise, and Assist" (TAA) mission. A smaller portion of the 4K increase will very likely enhance the CT mission in Afghanistan. The greater portion of the 4K increase will go to the TAA mission. The planners at Resolute Support headquarters in Kabul very likely have plans already in place for the increased level of troops. A reading of DoD statements and open source media could lead one to conclude that some advisors will be employed at the ministry and institutional level in the Kabul area while others will go out to the Train, Advise and Assist Commands (TAACs)  to work with the ANA Corps and regional Police Zone HQs.

Advisors at Tactical Level? Some advisors are already working at the tactical level - in most cases U.S. SOF and aviation advisors. In addition, there are some advisors who deploy to ANA brigade level on a periodic basis as part of an Expeditionary Advisory Package (EAP).

General Nicholson, the commander of the Resolute Support Mission, has indicated that many of the soon-to-arrive advisors will find themselves working at the tactical level - at brigade and possibly kandak (battalion) level as well. The advisor platform at Task Force Southwest and Task Force Southeast are understaffed and will likely be augmented. It is important to note that not all newly assigned personnel will be advisors - think of the tooth to tail ratio. Each additional advisor needs logistical, medical, intelligence, transportation, force protection, and life support. So a good proportion of the 4K that go to the TAA mission will be supporting the advisors.

Lack of a Strategic Plan? There are numerous reports in the media from critics and observers that cast doubt on the utility of more troops if a strategic plan is not developed and implemented for Afghanistan. SECDEF Mattis has said that this is in the works and we should learn more in mid-July. The strategic plan very likely will see more advisors serving at the tactical level assisting with planning and coordinating operations as well as providing U.S. enablers (ISR, air support, fire support, etc.). Hopefully this strategic plan will take into account the regional actors bordering Afghanistan, Pakistan's support of some insurgent groups and the sanctuaries within Pakistan, corruption in the Afghan government and security forces, the dysfunction of the National Unity Government (NUG), and the inept, ineffective, and corrupt leadership at all levels within the MoI, MoD, and ANDSF.

4-Year ANDSF Roadmap. The Afghan government does have a strategic plan in place and the U.S. is very likely going to support this plan as best it can. The Afghans have rolled out their 4-year ANDSF Roadmap which lays out their plan for professionalizing the Afghan military and police. This includes doubling the size of the Afghan Special Security Forces (ASSF), increasing the capability of the Afghan Air Force (AAF), reducing corruption, improving leadership, and improving training. The goal is to have the Afghan National Defense and Security Forces (ANDSF) achieve the ability - at the end of the four years- to improve the security situation in Afghanistan with the end result of a political solution to the conflict with the insurgents. Time will tell.