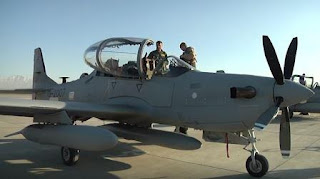 Attack at Bagram Gates. Eight Afghan security guards were killed and two wounded at the gates of Bagram Airfield by a Taliban attack on Monday night, June 19, 2017.

ISIS in Afghanistan - Still Big Problem. Despite the efforts of the U.S. and Afghan forces to defeat the Islamic State - Khorasan group in eastern Afghanistan the insurgent group remains as a big problem. Read "Pentagon: Islamic State Problem Not Getting Better in Afghanistan", Voice of America, June 22, 2017.

Tora Bora Mountains - Changing Hands. A week ago the Islamic State - Khorasan moved its troops into the mountains along the Afghan - Pakistan border area in southern Nangarhar province. In that process they fought and displaced Taliban groups who fled elsewhere. The Afghan government was quick to respond by sending in the ANA. So in about two weeks the region went from Taliban control, to IS-K control, to (supposedly) Afghan government control. It will be interesting to see who will end up owning the ground once the news cycle has shifted its spotlight. See "Afghan Forces Recapture Tora Bora Hideout From IS", Radio Free Europe, June 21, 2017.

Ramazan and the Fight for Kunduz. The fighting continues even during Ramazan; especially in Kunduz. Read "Ramadan on the Afghan frontline: after heavy fighting, hunger and boredom", The Guardian, June 22, 2017.

Nicholson Tours AAF. General Nicholson conducted a tour of some Afghan Air Force (AAF) facilities, looked over some AAF aircraft, met some AAF personnel and pronounced that great progress has been made. Read a press release by Resolute Support HQs that puts a warm glow in your heart about how well our U.S. taxpayers money is being spent. (RS HQs, June 22, 2017).

UN: Security Getting Worse in Afghanistan. A new quarterly report by the United Nations Assistance Mission in Afghanistan (UNAMA) states that the security situation is getting worse. See "Security Situation Worsening in Afghanistan, UN, Pentagon Warn", Radio Free Europe, June 22, 2017. You can read UNAMA's 14-page report on the UNAMA website.

ANA's Camouflage Uniforms. So it seems that the Combined Security Transition Command - Afghanistan (CSTC-A) is part of the reason the U.S. is spending more for ANA uniforms than needed. It appears, according to a report by the Special Inspector General for Afghanistan Reconstruction (SIGAR) that CSTC-A went with a proprietary camouflage pattern rather than a camouflage pattern that the U.S. government already owned. This increased the costs per uniform significantly; which means U.S. taxpayers spent @28 million more than necessary for ANA uniforms. View an interactive report by SIGAR at https://sigar.mil/interactive-reports/ana-uniform-procurement/index.html. Read the 19-page document.

CSTC-A Helps with Blood Bank. A recent truck bomb in Kabul that claimed up to 150 lives and wounded over 300 Afghans significantly depleted the stores of the Kabul blood bank. Read "CSTC-A resupplies life to Afghan Central Blood Bank in Kabul", RS HQs, June 22, 2017.

Car Bomb in Lashkargah. At least 29 people were killed and over 50 others wounded in a car bomb blast in Helmand province on Thursday, June 22, 2017 Some of those killed and injured were ANA soldiers in line to receive pay at the New Kabul Bank Branch in Lashkargah. This is the third time since 2014 that this bank has been attacked while soldiers were lined up to collect pay. Hmmm - lesson observed; not learned. (Tolo News).