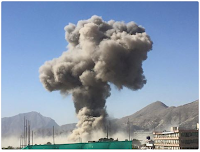 The devastating truck bomb on the outskirts of the 'Green Zone' in the diplomatic area of Kabul on Wednesday, May 31, 2017 is still having far-reaching effects. The sewage truck loaded with about 1,500 kgs of explosives killed more than 150 people and wounded more than 300. Afghan intelligence sources say that the explosives came from Pakistan. Many of the killed and wounded were employees of the Roshan telecommunications company. There have been street demonstrations against the Afghan government and subsequent terrorist bombings at funerals of those who died in the truck bombing. The government is in crisis mode with calls for the removal of key security officials by various political parties. Some observers fear that ethnic politics is agitating the fragile security situation and that opportunistic political leaders are using the tragic event to advance their personal positions.

Email ThisBlogThis!Share to TwitterShare to FacebookShare to Pinterest
Labels: suicide-bombers