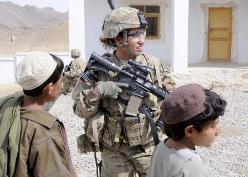 Article - Afghan Women in Conflict. "Popular distortions often applied to women's functions in war can obstruct the peace process." Rosalie Arcala Hall and Julian Smith say that there are several myths about women's roles in conflict and they inform us about them in this article. They look at several international conflicts in their study. "Women in Combat: Both Spoilers and Enablers of Peace", The Diplomat, February 15, 2016. The article is based on a book entitled Women in Conflict and Peace, International Institute for Democracy and Electoral Assistance, 2015. Includes case studies from Afghanistan, Myanmar, the Philippines, and Rwanda. The specific chapter (33 pages) on Afghanistan can be read at the following link. www.idea.int/publications/women-in-conflict-and-peace/upload/Women-in-Conflict-and-Peace-afghanistan.pdf

Women and Draft: FAQs. The Selective Service has once again come into the spotlight. The almost forgotten mechanism for inducting men into the military service has not been used since the early 1970s. However, with the recent changes in allowing women to enter the combat arms some are looking to subject women to the draft - should it ever come back. The first step is to require them to sign up with Selective Service. Currently all men must register with the Selective Service within 30 days of turning 18. Read more on the draft and selective service in "Women in combat and the draft: answers to your biggest questions", Military Times, February 16, 2016.

Adapting Physical Testing - Recruiting More Women. It appears that the U.S. Army is going to modify how it physically evaluates candidates for the military to ensure that the right people get to the right jobs. Read more in "Army Looks to Recruit More Women, Adapt Physical Testing", Military.com, February 13, 2016.

"Gender-Neutral Boots & Measures Taken to Mitigate Drop in Recruit Quality. It is a well-known fact that the quality of the manpower pool (should I say womenpower?) provided by American society has dropped significantly in terms of physical fitness. To ensure that recruits can handle the physical demands measures are being taken to screen recruits for their physical condition. In addition, there are other societal aspects being closely looked at that are prompting changes in footgear being provided to new recruits. Read more in "Drop in Recruit Quality: Military Now Required to Issue Basic Trainees Lightweight, Gender-Neutral, "Velcro" Boots", Article 107 News, February 16, 2016.