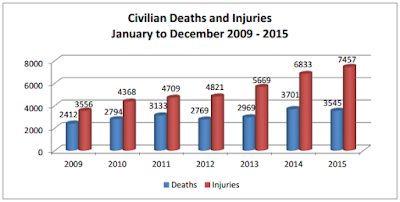 2015 was a bad year for civilians in Afghanistan. The numbers were very discouraging - with an increase in the number of deaths and injuries suffered by the Afghan population. At least 3,545 civilians were killed and 7,457 injured as the Taliban stepped up attacks against the Afghan government and its people. A recent United Nations report indicate that the casualty figures are surging along with the draw down of NATO-led combat forces. This is the highest number of total civilian casualties in a single year in Afghanistan since 2009. Many of the casualties were women and children.

Read past reports and news articles about civilian casualties in Afghanistan:
www.afghanwarnews.info/topics/CIVCAS.htm